Sasol Fire department invited Langamed as well as Working on Fire to celebrate the day with them.

This celebration took the form of a small march from Charlie One (Sasol’s main outside gate) to the Fire station inside the plant.

International Firefighters’ Day is observed each year on 4th May. On this date we remember the past firefighters who have died while serving our community or dedicated their lives to protecting the safety of us all. At the same time, we can show our support and appreciation to the firefighters worldwide who continue to protect us so well throughout the year.

Firefighters dedicate their lives to the protection of life and property. Sometimes that dedication is in the form of countless hours volunteered over many years, in others it is many selfless years working in the industry. In all cases it risks the ultimate sacrifice of a firefighter’s life.

International Firefighters’ Day (IFFD) is a time where the world’s community can recognise and honour the sacrifices that firefighters make to ensure that their communities and environment are as safe as possible. It is also a day in which current and past firefighters can be thanked for their contributions.

Andre Labuschagne, Firefighter at Sasol Fire, said to the Bulletin “we are doing this in recognition of our fallen brothers and sisters right across the world.”

Here is a little history about International Firefighter’s Day as taken from the Firefightersday website:

Read more about the Firefightersday HERE

International Firefighters’ Day (IFFD) is observed on May 4. It was instituted after a proposal was emailed out across the world on January 4, 1999, due to the deaths of five firefighters in tragic circumstances in a wildfire at Linton in Victoria, Australia.

May 4th (St Florian’s Day). May 4 is the feast day of St Florian, the patron saint of firefighters. St Florian was the first known commander of one firefighting squad in the Roman Empire. He lost his life, as well as those of his colleagues, for protecting the same humane ideas which firefighters all over the world share even today.

Firefighters in most European countries celebrate their day on 4th of May as a ‘Day of Fire Service’ as well as St Florian’s Day. This date is also known as St Florian’s Day worldwide and has been tradition for more than 150 years in Europe.

It is a day for emergency services to run events such as: memorial services; fetes, open days and fundraisers for relevant campaigns; long service and other presentations; and a media campaign to focus attention on the role, activities and key messages of firefighters and fire organisations.

For the community to:

A piece of red and a piece of blue ribbon pinned together at the top (blue over red). The combination of the two ribbons (5cm long x 1cm wide) pinned together should form an internationally common recognised symbol when worn. The IFFD ribbons are linked to colours symbolic of the main elements firefighters work with – red for fire and blue for water. These colours also are internationally recognised as representing emergency service.

Ribbons can be worn on uniforms and lapels on May 4, on the Sound Off and to mark respect for fallen firefighters. The ribbons could also be used to decorate trees, car antennas, letterboxes and other display areas by the community to show their support for IFFD and firefighters.

Often communities remember human sacrifice through observing a minute’s silence. For International Firefighters’ Day this is recognised in the form of a “Sound Off” – to reflect on the commitment and sacrifices of firefighters’ worldwide in a truly poignant manner for emergency service workers. The Sound Off is held annually on the first Sunday of every May for firefighters to stop and remember our fallen and past members in an international show of support. 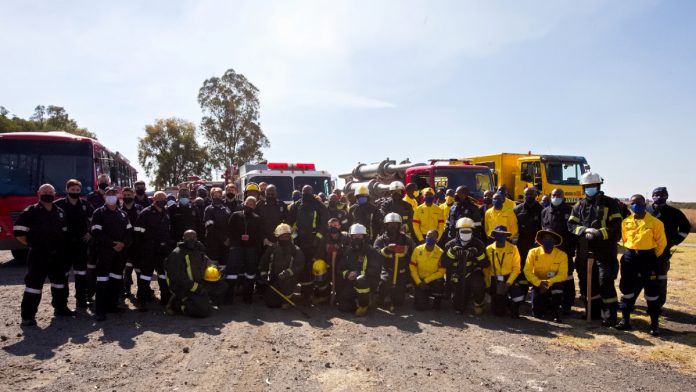