CrimeOpening false cases can land you in hot water.
Crime

Opening false cases can land you in hot water.
O

THE PUBLIC URGED TO REFRAIN FROM OPENING FALSE CASES

NELSPRUIT – Police management in Mpumalanga has sent a stern warning to members of the public not to open false cases as such acts that can land them in prison. The warning comes in the wake of the arrest and court appearance of Promise Lawrence Mnguni, aged 29 who intentionally fabricated a robbery case on 16 April 2021.

According to the report, Mnguni is said to have opened a house robbery case. He then told police that on the day in question, he heard a strange noise in the yard of his employer’s house, a place where he also resides. According to him, his employer was not at home at the time of the said incident. He then further informed police that he went to investigate and when he drew near the door, he saw seven armed men whose faces were covered. They (suspects) then instructed him to go back to the house, where he was told to open the doors of all the rooms.

A robbery case was opened and police began with their investigation with anticipation to bring those responsible to book. On 23 April 2021, the investigation team went to Mnguni for further probe. The astute members noticed some inconsistencies in that some of the information that he initially mentioned in his statement, did not tally with the one he gave them when they interviewed him. Mnguni is said to have indicated at first that there were seven suspects who attacked him but later during the interview, he mentioned only four suspects.

Police then told him about this discrepancy, he then admitted that the robbery was staged. He further informed police that all the things he earlier told police during the opening of the case were fabricated to look real, meanwhile, it was untrue. Police then informed him that his actions amount to a criminal offence hence his arrest and a charge of perjury laid against him.

Mnguni has already appeared before the Emalahleni Magistrate’s Court for having made up a story that did not exist. His first court appearance was on Monday, 26 April 2021, where he was remanded in custody and the matter was postponed to 10 June 2021, for further investigation.

The stolen items have not been found as yet however, the investigation thereof is underway.

The Acting Provincial Commissioner of the South African Police Service in Mpumalanga, Major General Thulani Phahla has further conscientize the community that opening false cases have a huge negative impact on the fight against crime. ” When someone falsely opens a case, resources that were supposed to have been used in areas where they were needed most are then wasted. Other criminal activities can occur in other areas whilst manpower is misdirected by those who act irresponsibly,” said General Phahla. 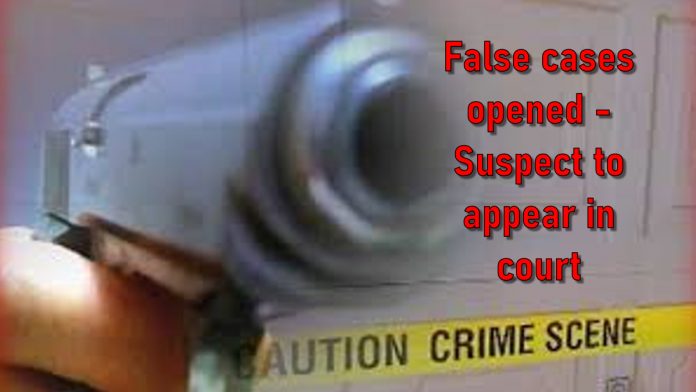 Opening false cases can land you in hot water.