Rally fans are braced for a fighting, fast weekend of stage action when rounds 3 and 4 of the MRF Tyres 2022 South African Rally Championship goes down at Lake Umuzi in Secunda this 10-11 June weekend. Which also makes it all to play for after the recent opening rounds in the Cape wreaked havoc among leading crews, to turn the title pecking order on its head.

So, taking a cursory glance at the MRF Tyres 2022 South African Rally Championship standings leading the Lake Umuzi National, one may not read the true form, especially considering some teams are yet to score points, while several new entries will join the weekend’s Mpumalanga stage action to mix it up even further

Topping the championship table, perhaps by virtue of consistency rather than pure speed, Chris Coertse and SA champion navigator Greg Godrich hold a handy eight-point championship advantage in their Rally Technic Hyundai i20 AWD. The second national entry home overall and the NRC1 class win on Friday in the Cape, followed by another second overall and second in NRC1, is enough to see Coertse and Godrich leading the way to Secunda.

Two other crews flew under the radar to great effect in the Cape. Johan Strauss and Elzaan Venter were the third national crew home both days in their Subaru Impreza STi, and second and third in the NRC1 rounds. They sit a comfortable second in both the overall and NRC1 title chases. Anrico Opperman and Tommy Coetzee’s Shield VW Polo quietly took both Cape NRC4 wins, ending sixth of the national cars on Friday and fifth on Saturday to leave the Cape third in the chase.

The winners on the two days in the Cape each failed to finish the other days. This leaves Overberg Saturday winners, SA champion Theuns Joubert and Schalk van Heerden’s NRC1 Salom Toyota Yaris fourth in the chase. They hit trouble early on and soon after retired from round 1 in the Overberg, before bouncing back to win round 2 on Saturday. All of which means that Joubert and van Heerden are out to make good on home ground at Secunda.

Benjamin Habig and Barry White made waves when they quite literally came out of nowhere to win the KZN youngster’s first MRF SA Rally in their NRC2 Just Tools Volkswagen Polo. They hit gearbox trouble to retire on Day 2, but their impressive Friday performance was enough to see them leading NRC2 by a handy margin. Judging by his Cape pace, Benj, son of multiple SA champions Jannie, and White, will be a force to be reckoned with overall at Secunda, and beyond, too.

The real danger however lies sixth in the MRF SA Rally Championship. Guy Botterill and Simon Vacy-Lyle’s brand new Gazoo Toyota Racing Starlet showed increasingly stunning pace as the opening Overberg weekend progressed, only to be stymied by teething problems. It goes without saying that once this factory-supported turbo 2-litre all-wheel-drive rally weapon is fully sorted, its intrepid crew will be hard to beat. But is that car fully ready for Secunda?

Second in NRC 2 by virtue of a strong Friday run in the Cape, Gerald Klopper and Johan Aucamp’s Etios sits sixth in the title chase ahead of rally lass Andrea and her mum lsabel Raath’s Toyota NRC4 RunX. The rest of the national field was decimated by attrition on those Cape stages, but rest assured, all of them are out to make up for that Overberg disappointment.

Wilro Dipenaar and Carolyn Swan’s howling normally aspirated PZN Toyota Auris 4×4 dominated the stages while it lasted down in the Cape. Anton Raath and Louis Menge are out for a good result after rolling their Ford Escort Cosworth out. And George Smallberger and Robbie Coetzee’s Shield VW Polo ran well before an engine issue stopped it late Friday. Take it with salt, they will all be back for revenge, while an impressive count of new cars and crews will shake it further up.

They include Jonathan Simms and Hannes Pienaar’s NRC1 Toyota Tazz and NRC2 lot, Aaron Raaths and Mari Dicasse’s Toyota Auris, Mike McGregor and Armand du Toit‘s VW Polo, and Ford Focus pair JJ Potgieter and Tommy du Toit and Magriet Potgieter. Plus a wild and assorted gang of regional entries, some of which are likely to give their national rivals a good run for their money.

Running as two separate MRF South African National Rally Championship rounds on Friday 10 and Saturday 11 June, the Lake Umuzi National commences with a ceremonial start at Eastvaal Motors in Secunda at 10.30 am Friday. The event runs out of a central service park on Lake Umuzi’s south bank. Spectator Guides will be available online, from the start and at the service park.

This article was previously published at and provided by Motorsport Media. 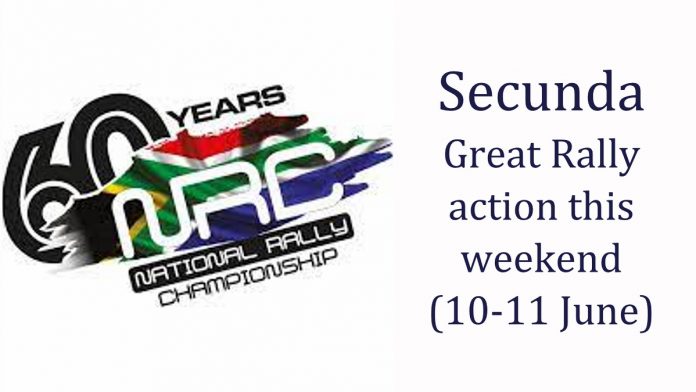