NewsN17 potholes have motorists up in arms
News

N17 potholes have motorists up in arms
N

The N17 potholes have several motorists up in arms over the past Easter weekend.

Several complaints were received by various social media groups regarding the potholes on the N17 between the water towers and the Trichardt toll plaza.

A message started to circulate that the road has been washed away between Trichardt and the Water towers. Motorists were advised to use alternative routes. This message incited anger and frustration among road users as the words ”washed away” means that there is no more road.

Some people asked about the validity of the message while others took it as the truth and added fuel to the fire by spreading the message far and wide.

The message proved to be False although the road condition of the N17 was dangerous.

Several people threatened to close the toll gates until the potholes are fixed whilst others demand that the gate be opened and no tolls are charged for the road use.

The Bulletin decided to travel the N17 from Bethal to the water towers to ascertain the exact state of the road.

We found several potholes along the route. Several of the potholes are quite large. Near Holfontein, water from the adjacent farm area damaged the road quite extensively with a very large pothole on the edge of the road. We could not take a photograph of that area as it was too dangerous to stop nearby.

We found, however, a team fixing the potholes. The Bulletin spoke to the workers and was told that they had to fix all the potholes. Although this is great news it needs to be seen as some of the potholes can not just be filled with tar and stamped firm.

In some areas, the road surface needs to be redone completely. Maintenance is very important in keeping potholes from forming.

Also read: Motorists urged to be cautious in the rain

The traffic and water combine to create holes in the road surface. Water pressure created by vehicles driving across the water in small cracks and holes will cause the defect to rapidly increase.

Sanral states its mission as follows: “Our purpose is to deliver a safe, efficient, reliable and resilient national road transport system for the benefit of all the people of South Africa.”

Sanral has a primary mandate to manage and control the national road network and take charge, amongst others, of the development, maintenance and rehabilitation of national roads.

Sanral released a press release regarding the projects in Mpumalanga. It is worthy to note that there is no mention of any project to repair the road in Govan Mbeki. During the GMM presentation all projects that were mentioned outside of GMM, from our borders to other towns.

The Bulletin will try and get more clarity on the subject so that GMM residents and N17 users may have more clarity.

Here is the full statement:

SANRAL willing to respond to the needs of Mpumalanga stakeholders

Pretoria, 30 March 2022 – The South African National Roads Agency SOC Limited (SANRAL) is willing to respond to the needs and expectations of stakeholders in Mpumalanga, says Board Chairperson Themba Mhambi.

Mhambi was speaking during the “Taking Sanral to the people” stakeholder engagement session in Secunda in the Govan Mbeki Local Municipality on Friday, 25 March 2022. This engagement was in line with SANRAL’s fourth pillar of Stakeholder Relations, which requires stakeholders to be consulted about all project-related activities that affect communities.

During the session, stakeholders voiced concerns about formal training for small businesses prior to bidding for projects to ensure that they have an improved chance of procuring the opportunities. Stakeholders also pleaded with SANRAL to first consider local businesses to be appointed as the main contractors for projects since there were far more capable businesses in the area, and only outsource where they don’t meet the requirements.

The chairperson emphasised that all SANRAL projects should have a direct impact on the communities in the form of jobs, community development and skills training for small, medium and micro enterprises (SMMEs).

“SANRAL is committed to ensuring that its transformation policy is understood and relevant to the communities in which its projects are operating and ensure that all SMMEs in the affected local municipality are afforded an equal opportunity to tender for projects in the area,” he said.

Mhambi said that SANRAL’s Horizon 2030 Strategy is a proactive response to deliver on the agency’s vision of a national transport system that will ensure a better South Africa for all. It sets out in detail the strategic objectives and the critical enablers that will make it possible for the roads agency to remain a respected, dynamic and responsive organisation over the years to come.

The Executive Mayor of the Govan Mbeki Municipality, Cllr Nhlakanipho Zuma, welcomed the visit by the roads agency as it will solidify the partnership between the two entities and will help in advancing the link between road infrastructure and the local communities.

“We are a diverse municipality which accommodates all forms of nations. We are an economy with high factors of industrialisation which seeks to attract an average of 3,3% of population growth per year,” he said.

The mayor highlighted the negative impact of the COVID-19 pandemic on the local economy.

“While we have a population growth of 3,3 %, we are currently sitting at 1% growth of the economy which indicates the state of the livelihoods of our people. Once you have your economic growth sitting beneath the population growth, it means that you are reproducing over elements of poverty and unemployment. Therefore, we appreciate any initiative that will come and advance us,” said Zuma.

The municipality boasts about 998 km of road infrastructure: 505 km are tarred roads and 398 gravel roads which the municipality says it is struggling to maintain to the acceptable standards required.

The municipality is also home to one of the country’s national key points, the Sasol plant, which attracts lots of heavy trucks to the area, meaning the road infrastructure requires maintenance on a frequent basis.

SANRAL manages about 2 400km of road infrastructure across the province and has planned a couple of projects throughout the municipality. Some of the key projects earmarked for construction, upgrading and maintenance include:

The duration of these projects ranges from 10 to 15 months, and they are estimated to cost between R40 million to R50 million each. Opportunities for subcontracting in these projects include concrete pavement repair, drainage and structures improvements, road furniture (road signs, guardrails) and road markings.

There is currently 10 routine road maintenance (RRM) projects servicing the province. Two more will be awarded before 31 March 2022. There is a Special Maintenance Project along the N17 Section 5 from Chrissiesmeer to km 85 within the Msukaligwa and Chief Albert Luthuli Local Municipalities respectively and the project will be completed approximately on 31 March 2023.

SANRAL has approximately 2 500km of road network where maintenance is being done through RRM projects in the province.

Maintenance of the road is an ongoing exercise and is the only consistent activity within the SANRAL road network that is critical in creating jobs for local communities and subcontracting opportunities for targeted businesses on an ongoing basis.

SANRAL will continue to consult with all key stakeholders and partner with provincial and government entities to uplift communities and grow the economy to guarantee a better life for all. 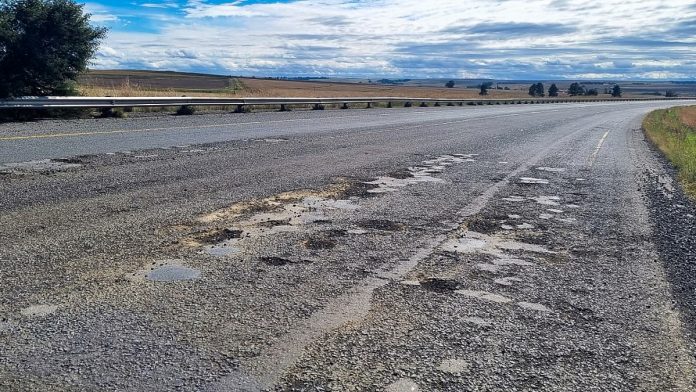 N17 potholes have motorists up in arms