The Premier of Mpumalanga, Refilwe Mtshweni-Tsipane heald a press briefing this afternoon. Here is her full statement as received from her office.

I hereby wish to announce that I have decided, after consultation with the ANC leadership in the Province, to release MEC Mandla Msibi, responsible for Agriculture, Rural Development, Land and Environmental Affairs, from his position in the Provincial Executive Council, with immediate effect. I am doing so in the light of his much-publicized detention yesterday the 11th of October 2021.

The decision to release MEC Msibi has been taken into consideration of the seriousness of the charges he is facing, as well as the impact that same will have on his work as an Executive Authority in government. After all, it is to be expected that he should dedicate a fair amount of time to the case he is facing. It is common cause that the governing ANC has set itself a particular moral standard that all of us as its public representatives have to abide by.

Whilst I release MEC Msibi from his role and responsibilities, I wish to emphasize and accordingly observe the two basic pillars of our jurisprudence: the right to be presumed innocent until proven otherwise, and the right to equality before the law.

In the meantime, I have determined that MEC for Cooperative Governance and Traditional Affairs, MEC Busisiwe Shiba, will continue to act in Hon Mandla Msibi’s position until it would have been filled substantively.

Mandla Msibi is a comrade of mine, whom I have known and worked with over many years. I hold him in very high regard. and shall continue to so do until proven otherwise. In this regard, I can only hope that this unfortunate event will afford him the opportunity to reflect deeply.

It remains for me to thank Cde Mandla Msibi for his collegiality and commitment during his tenure as MEC in the Mpumalanga Provincial Government.

Advertisements
Previous articleOctober Golf fest was a great success.
Next articleANIMALS 101 – HOW TO COMFORT YOUR STORM-PHOBIC PET 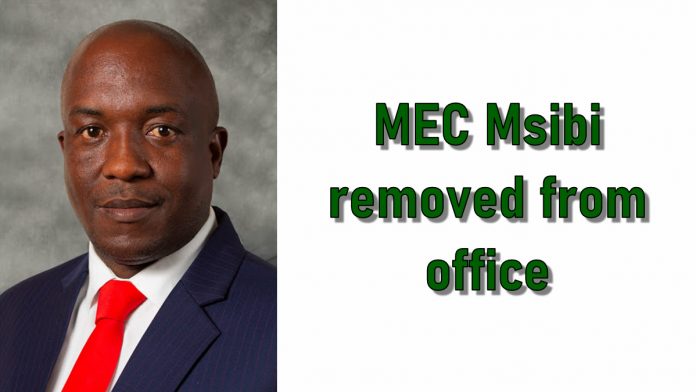