CityPressDA calls on Mpu Premier to act on Murder...
CityPressNews

The Democratic Alliance (DA) in Mpumalanga calls on Premier Refilwe Mtshweni-Tsipane to immediately act on her controversial Agriculture MEC, Mandla Msibi, who is currently in custody facing charges of murder and attempted murder.

It has been reported that Msibi handed himself over to the Nelspruit Police Station on Monday morning in connection with two counts of murder and attempted murder which allegedly happened in August this year. Msibi appeared briefly at the Nelspruit Magistrate Court where he remains in custody.

Msibi is not new to controversy. He has been in and out of courts since 2017 for a number of charges which include the following: murder, attempted murder, malicious damage to property, robbery, and violent assault. Yet again, he is facing serious charges of murder and attempted murder.

“Like a typical politician in the ANC, Msibi survived all the above charges against him,” Said Jane Sithole, DA Leader: Mpumalanga Province, “Leaders must act responsible and earn the trust of the community.”

The DA also calls on the ANC not to use its power to protect Msibi from law enforcement agencies. They must let the investigation take its course, and if he is found guilty, he must be imprisoned like all offenders. The DA will closely monitor such developments.

The DA urge Premier Mtshweni-Tsipane to immediately remove Msibi from her Cabinet if the ANC is serious about their own step aside rule until Msibi’s name is cleared by a court of law.

It is time for the ANC in Mpumalanga to put their money where their mouth is and stop harbouring alleged criminals within their ranks. Msibi must face the full might of the law like any other citizen.

If the Premier fails to act, that will show the people of our Province that she will always put the ANC and his comrades first instead of ensuring Mpumalanga is a safe place for all its citizens. 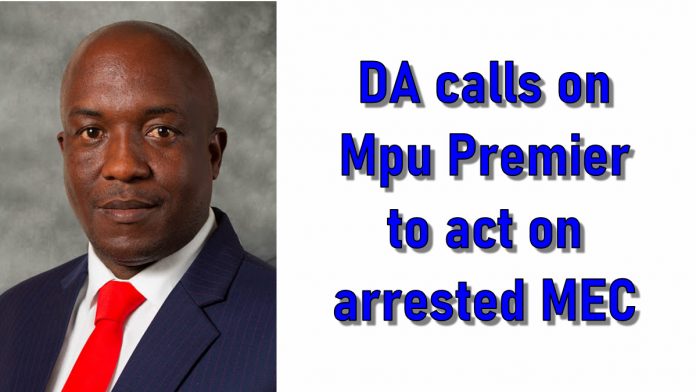