The ANC used municipal resources during their candidate selection process for the upcoming local government elections.

The ANC Candidate Selection Processes here in Govan Mbeki Municipality are comprised of several public meetings where people are told that they have to elect their councillors. People speaking to The Bulletin said that they are electing councillors and are under the impression that this will be the councillor after the October elections.

Videos surfaced where at least two Law Enforcement Officers are seen to be keeping people at bay. This raises a lot of questions regarding the running of this municipality.

Why does the MMC have bodyguards?

The Government Gazette dated 24 April 2020 (no 43246) makes it very clear that only Executives Mayors, Mayors and Speakers are entitled to two bodyguards. Deviation from the norm may only be based on the recommendations of the South African Police Service.

This brings to question why she is using GMM officials that were seen to be using GMM vehicles.

At one meeting it is alleged that another ANC councillor was assaulted and arrested by the Law Enforcement Officers.

The Bulletin wrote to the communications department of Govan Mbeki Municipality with the following questions:

At the time of placing this article, their only response was that they are investigating the incidents.

The Bulletin spoke to Ciska Jordaan, DA Cllr in Govan Mbeki Municipality and also DA Mpumalanga Deputy Chairperson about the use of officials for political work.

“The Democratic Alliance will question the ANC’s use of municipal bylaw enforcement officials as bodyguards to the MMC Thandi Ngxonono during a meeting in which the ANC was informally deciding on their candidates for the local elections which are taking place on the 27th of October,” said Ciska, “ Video footage of the meeting was shared widely on social media which clearly portrays a disgruntled community which the MMC apparently required protection from by the municipal officers.”

“Ironically, while the ANC dramatically pretends to consider the needs of the community – by asking residents to nominate candidates – they continue to misuse public funds while doing so!” she continued, “The ANC’s continuous misuse of council resources and their desperate attempt to submit candidates at the last second only reflects their pathetic record of governing this municipality and is a taste of what’s to come, should the ANC win governance of this municipality again.”

Ciska concluded with the following statement:

“The DA has been conducting candidate selection processes for a year in which candidates have submitted CV’s, been vetted, completed a training course and assessments as well as interviews which were scrutinized by provincial and national bodies of the party before submitting its candidate lists on Monday. This is concrete evidence that the DA gets things done. Voters will have the chance to oust the ANC on 27 October, we urge them to come out in numbers and vote for real hope and real change.”

Also read: Nkangala District Mayor and 8 others appear in court

The ANC selection processes were marred by incidents where the people were not allowed into the venue and elections that did not reflect the will of the people attending. The Bulletin received several phone calls from people requesting The Bulletin to investigate the processes that were followed. Some even called it corruption.

The videos clearly show that the people are upset by the presence of Thandi Ngxonono and they told her to leave.

The selection processes followed by Thandi Ngxonono, and several other ANC members, are in stark contrast to the ANC’s Freedom charter adopted at the “Congress of the People, Kliptown, on 26 June 1955”

The leading paragraph reads as follows:

We, the People of South Africa, declare for all our country and the world to know:

that South Africa belongs to all who live in it, black and white, and that no government can justly claim authority unless it is based on the will of all the people;

that our people have been robbed of their birthright to land, liberty and peace by a form of government founded on injustice and inequality;

that our country will never be prosperous or free until all our people live in brotherhood, enjoying equal rights and opportunities;

that only a democratic state, based on the will of all the people, can secure to all their birthright without distinction of colour, race, sex or belief;

Several ANC councillors are expected not to return as the ANC will use this election to try and strengthen their grip on the approaching municipal elections.

During the current term of office, the ANC had to deal with the disgruntled members on several occasions. The protests that resulted in the burning of Emba Mall was during such a period of dissatisfaction by ANC councillors.

The ANC National List Guidelines of 2018 gives the following criteria for people to be elected during the 2019 elections:

CRITERIA FOR CANDIDATES AND LISTS

The Criteria must be guided by the character of the ANC, our objective of winning elections, and the kind of people we need in government. The List process is an ANC process, and all candidates stand as ANC members. Provision will be made for the effective participation of the Alliance in the process. There will be no reserved seats for any organisation within or outside the Alliance on the lists because MPs are ultimately accountable to the ANC.

Candidates should meet the following criteria:

a) ANC member in good standing with a proven track record of commitment to and involvement in the democratic movement.

b) Experience, education or expertise that will enable them to make a constructive contribution in the relevant legislature or in parliament.

c) No criminal record after 1996 that resulted in a sentence of 12 months or more without the option of a fine (this excludes political-related crimes committed before April 1994).

d) No history of ill discipline or corruption.

e) No history of involvement in fostering divisions and conflict.

f) No other breaches of the ANC code of conduct.

One can only wonder if these criteria are also applicable to the ANC local election processes.

Fewer than half the ANC’s current councillors have been deemed fit to contest the upcoming local government elections, party Deputy Secretary-General Jessie Duarte has said.

“There is a great number of people who are not happy with not being returned,” Duarte told journalists during a Zoom press conference shortly before the Electoral Commission’s (IEC’s) extended 9 pm deadline for the submission of party lists on Monday night.

The African National Congress (ANC) said that it has ratified the names of almost 10,000 individuals who were nominated to its ward and proportional representative candidates list ahead of the local government elections.

The party’s national executive committee (NEC) met over the weekend to approve the candidates which will be submitted to the Independent Electoral Commission.

The ANC has commended the steadfast dedication and commitment of party and community members to participate in the councillor nomination process under unusual and difficult conditions.

An extended national executive committee (NEC) met on Saturday and Sunday to approve the lists of ANC candidates for the local government elections scheduled to take place on October 27, 2021.

Representatives of the extended NEC include ANC provinces, leagues, and alliance partners – the SACP and Cosatu.

The Mail and Guardian wrote:

ANC insiders have said that Tshwane regional chairperson Kgosi Maepa has also made it to the top of the PR list, making him the top candidate.

The ANC has been plagued by allegations of list manipulation, with branches protesting against the formation of the party lists at the national headquarters in Luthuli House and the provincial headquarters.

Shortly before the 9 pm deadline to submit its candidate lists to the Electoral Commission of South Africa (IEC), ANC members and supporters are said to have closed roads leading to the IEC in Pretoria, calling for the ANC to resolve their concerns, Timeslive reported.

It is clear that the democratic image that the ANC wants to show their people and the world is not so democratic as it seems. It would also appear that in an attempt to improve their image after several scandals surfaced with prominent leaders, several candidates have now been side-lined. 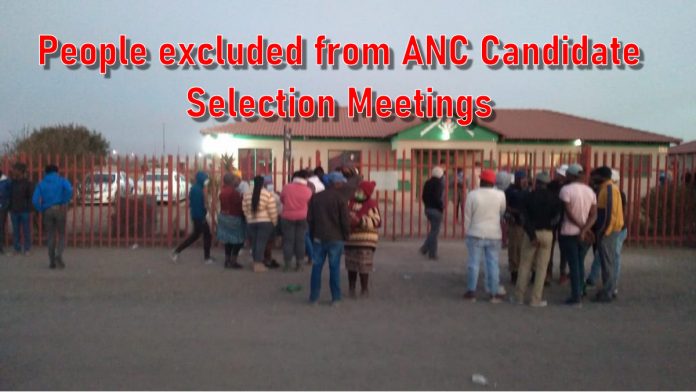