Spelling Bee by Friends of the Thistle Grove Library
S

The Friends of the Thistle Grove Library hosted their second Spelling Bee on Wednesday.

Spelling Bee! What is it?

A spelling bee is a competition in which contestants are asked to spell a broad selection of words, usually with a varying degree of difficulty.

The origin story of just why it is called a spelling ‘bee’ is actually fairly unique. The ‘bee’ in ‘spelling bee’ is an alteration of a word that meant ‘the voluntary help given by neighbours toward the accomplishment of a particular task’. This descends from the Middle-English word of ‘bene’. Before we had the term ‘spelling bee’ we had a few other terms that sounded much more competitive such as ‘trials in spelling’, ‘spelling combat’ and ‘spell down’.

The spelling bee and its name has come to us from America and first appeared in print in 1875 – that makes it a pretty old tradition! The name spelling bee is said to have originated from the Middle English word ‘bene’, which means ‘a prayer’ or ‘a favour’. In England, this has developed into a dialect form of this word – ‘been’. This refers to the voluntary help given by neighbours toward the accomplishment of a particular task.

This word, like many others, has developed and changed a lot over time. By the late 1700s, the word ‘bee’ was used to describe a group gathering together to accomplish a task – words such as ‘spinning bee’, ‘quilting bee’ and ‘husking bee’ were fairly common.

Enough of the background! Let’s get to the important stuff.

The Spelling Bee, hosted by Friends of the Thistle Grove Library, was held at the Kinross Sasol Club in Thistle Grove.

Strict time-keeping protocols were in place and the pupils had to concentrate hard to spell the words correctly. The disappointment on their faces was difficult to hide when they made a mistake and misspelt a certain word.

Adv Tracy Keen, Louise Saunders, Kasegle Moodley, Zika Makama and Nosipho Hlogwane acted as the judges and made sure that every spelling was correctly captured and judged. Thank you to all the judges for your dedication.

Witney Rasaka spoke to the Bulletin about the Friends of the Thistle Grove Library and the Spelling Bee, “we wanted to give the kids a set of words that they can take through school that they may not have learned in the class.”

Libraries are the perfect place to practice as there are a lot of books to read. These books vary in topic, writing style and language. The bottom line is to read and to read a lot

There are other programs promoting the Spelling Bee’s. One such program is from the Department of Basic Education. They wrote on their website: “As part of the Read to Lead Campaign, the DBE hosts the DBE Spelling Bee South Africa (National spelling bee championship) and promotes the love of reading through the promotion of reading clubs in schools, annually.”

Spelling is one of the fundamentals of a language and as Witney said, “we are losing our identity if we cannot spell.”

Please support the Friends of the Thistle Grove library in the excellent work that they are doing in getting the community together and educating the young children.

Thank you to the following sponsors for making this day possible: 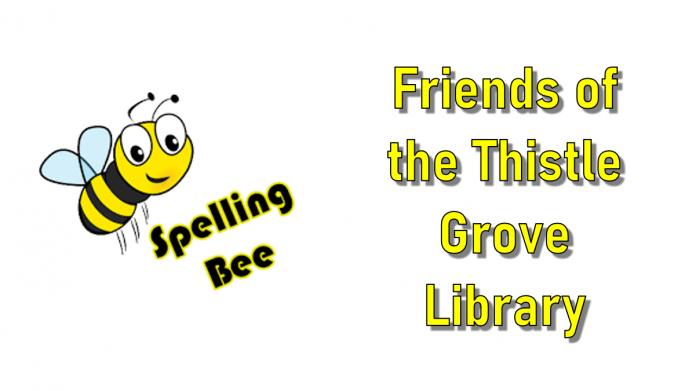