SAPROMO statement on state of services in Govan Mbeki Municipality

Sibusiso lashed out at the ANC leadership during the meeting stating that the leadership of Govan Mbeki Municipality are failing in their services to the residents of GMM.

“ESKOM and rand water debts should not be used as an excuse to the failure of the Municipality to deliver adequate services to the communities. Both administrative and political leadership has ignored all warnings and advice given by SAPROMO to improve the quality of services delivered by the Municipality. The behaviour of the leaders of Govan Mbeki Municipality is very puzzling and raise questions as to whether they care about the lives of the residents within jurisdictions of this Municipality because they fail to implement all suggestions with potential to improve services in the area.”

SAPROMO further suggested that a public-private partnership with Sasol be proposed by the Municipality to establish a separate entity in line with municipal finance management act to independently generate and supply electricity in Govan Mbeki Municipality.

This suggestion will see the Municipality supplying consistent electricity service within its jurisdiction even during ESKOM load shedding without any interruption. Govan Mbeki Municipality might be the first municipal area that will never be affected by load shedding which might cause investors to consider relocating their firms and offices to the area. Therefore, more jobs might be created which may improve a lot of people’s lives.

Another important suggestion that was presented by SAPROMO is a Quality Assurance and Compliance Committee of the council that could help in determining the Quality of municipal services within the Municipality. It would also assure the council that quality transformers are procured as well as other electronic components from credible suppliers, at reasonable prices.

However, due to the fact that these ideas are not coming from the ruling party and for the fact that there’s nothing the leadership of this Municipality will personally gain from the ideas, they will never be implemented.

SAPROMO also proposed competitions and incentives for those who constantly pay for their services. For instance, we proposed that if the ratepayer pays his or her current account for 6 months consecutively, the Municipality reduce old debt by at least 10%. SAPROMO further proposed that there must also be competitions where the residents would win prices like electric appliances and cash prices for consistently paying their accounts.

Sakhisizwe Progressive Movement ( SAPROMO) was established as a community concern group in 2013, by Sibusiso Hlolweni to address issues of service delivery and youth unemployment in Mpumalanga. The group was formed in Mbombela Municipality and later spread to all the 3 regions of Mpumalanga.

the first meeting was held in eMzinoni where the assessment was conducted to see if the group can fit to become a political party. Lindiwe Nkosi from eMzinoni was then nominated as a coordinator of eMzinoni Bethal area. It was then followed by a meeting that declared the group as a political party, on 20 March 2016 when signatures were taken and submitted to the IEC.

The meeting was held at ext 18 (gate 2, Wellas). On that meeting, Sibusiso Hlolweni was elected as the first president of the party, deputized by Masobode Kubheka (in absentia). Dorah Magudulela was elected as a chairperson and Noncedo Vumani as the Secretary of the party.

It was then officially registered as a political party on 18 May 2016, a few months before the elections.  Another important meeting was held again in Bethal where Noncedo was replaced by King Mhlangu as the Secretary-general of the Movement, just after it was officially registered with the IEC. Johannes van Ballen was also co-opted into the structure as the COORDINATOR of Bethal eMzinoni region.

The Movement entered elections with no experience and within a short space of time since it was established as a party and was able to win a seat in Govan Mbeki Municipality with more support coming from eMbalenhle, Leslie and eMzinoni.

To date the leadership of this party comprises of:

Sibusiso Hlolweni as the president

Sandile Mfunda as the chairperson

Mike Skhosana as the Secretary general

Gugu Masilela as the treasure

Noncedo Vumani as the head of elections and Vuyisani Sovendle as the organizer. This leadership were elected in a conference that was held on 18 May 2019 at eMbalenhle Sasol club.

The following on SAPROMO’s Vision and their mission was supplied to the Bulletin by Cllr Hlolweni.

To establish an educated, noble, just,  working and economically progressive society where members of the community partake in decision making and governance of the country and community they are living in.

To place the best equipped public representatives in every community, to best address the challenges that the people on the grass-root level face on daily bases, and to spread information to every person in the language he/she understands in order to have a transparent and effective government.

Sakhisizwe Progressive Movement means a bargaining collective and our leaders are mediators between different community organizations, role players and members of the community. We give individuals and collectives a platform for engagement as well as exercising their abilities and rights, in order to benefit the country and the communities they are coming from.

I) To establish an educated society…

Education is a tool for the success of the nation; therefore it is something that should be taken seriously and be prioritized. It should be enjoyable to learners and be cherished by the communities, therefore it is vitally important to give the society a free, quality and compulsory education to every member of the society so that every single person in the country should be able to read and write. For the reason that the majority of the citizens are unemployed and have no income, it becomes a struggle to get a tertiary qualification, that is why we emphasize that education should be also free even in universities and colleges.

To express our seriousness about the issue of education, we are willing to build community centre’s that are going to train people in different skills and empower them with life skills to be able to get employed or to employ themselves and others using skills that we give them.

II) … Noble society means moral principle environment where the spirit of unity and ubuntu is governing. No one deserves to sleep on an empty stomach, no one deserves to be mistreated by either the government or private sector. This means the moral regeneration is one of the vitally important elements that we so determine to promote. Every individual comes from a family, every family comes from a community and every community is a member of the country. Therefore, we want to build an environment where individuals are noble to create a noble society.

III) An economically progressive society, we mean that every member of the community contribute his or her skills and finances to the economy. The state and the public sector should invest in our township and rural areas to make sure that every community participate in the growth of our economy. If the economy grows, no one should tell but everyone should feel it in his/her pocket. We intend to provide the society with skills and help them step by step in creating their own businesses. We want to help people mostly from rural areas with tractors and other agricultural equipment to help the country in stabilizing food security.

We believe that food should be affordable and be accessible in every part of the country, therefore the government should address it by improving agricultural policies and to make sure that food production increases so that the prices may decrease.

We believe that the issue of people being in credit bureaus is one of the contributing factors to the collapsing of our economy, therefore there should be a period of credit amnesty where people will be cleared on credit bureaus in order to start on a clean slate because people are not informed about credit policies and they don’t even have a knowledge of how to handle their finances.

For instance, if a person buys something on credit and loses a job, the interests should not increase while a person is still looking for another job. This is a serious matter that should be prioritized by the state and the organization itself.

IV) We believe that nothing should be decided for the community without them. They should be the ones that decide the service delivery in their localities and they must also participate in the development that occurs in their areas. For example, if the roads are being built on their areas they should be grouped in cooperatives and be involved in building their roads, schools and whatever development is taking place.

We believe in equal distribution of wealth, opportunity to work at a fair wage; a constitution that allows an effective voice of the community in deciding the conditions in which they are living in; to create a conducive environment for consumers real freedom of choice and protection against monopoly from both private and public.

Members of SAPROMO are vigilant, progressive and hardworking individuals coming from different backgrounds and walks of life. We intend to attract young and old from sports teams, arts (music, visual and dance), intellectuals, activists and all creative individuals in our society to form part of our team that will pursue success and justice through our available resources. 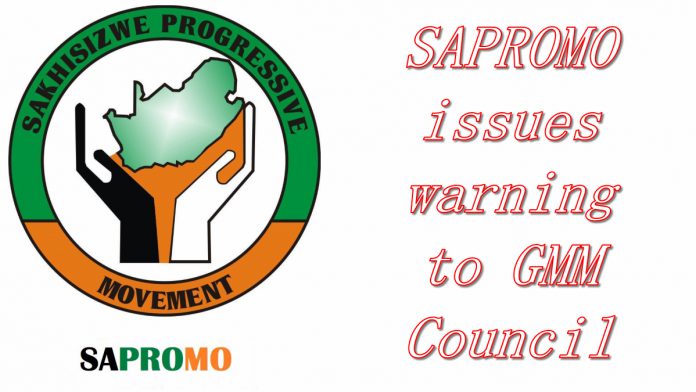