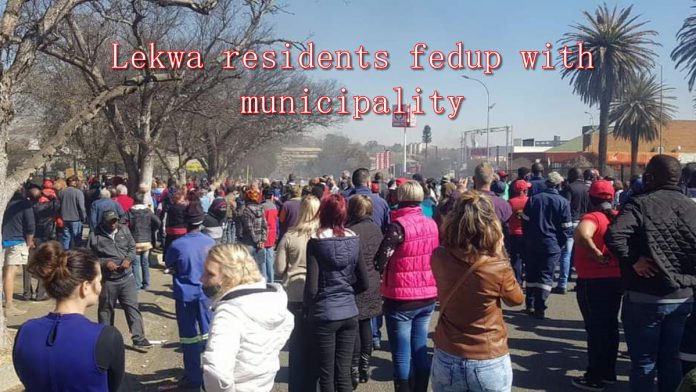 Lekwa residents are fed up with the municipality

The past weeks have been trying times for residents of Lekwa (Standerton).

Years of mismanagement and neglect have now culminated in protest action from residents of Standerton.

Standerton is one of the worst mismanaged municipalities in Mpumalanga if not the whole of South Africa.

One resident told The Bulletin that there had been a power cut on Monday that lasted until Tuesday late afternoon. Only intervention from the residents ensured that the power was switched on again. The ratepayer’s association obtained a court order against the municipality forcing them to restore the electricity supply.

Water are also in short supply as residents are struggling with their water supply. There had been a pump failure and when a new pump arrived the Municipality could not install the pump. Private contractors had to do the installation.

Residents staged a protest on Wednesday and handed a memorandum to the Lekwa municipality demanding that the municipality get their house in order.

The memorandum contained the following demands:

We pay for services, but we receive none. Electricity, clean drinkable water, refuse removal and maintenance of the road to name a few. We demand service delivery become a priority. Not only do we pay for said services but some of them are basic human rights.

The Mayor and Municipal manager must go:

We demand that they be removed from their posts. We demand they be replaced with capable and more importantly, willing candidates. The mere fact that the mayor can’t be bothered to live in the S…Hole he created speaks volumes

We demand that immediate disciplinary action be taken against the electricians for their illegal strike as essential workers. They belong to unions that should be fighting their battles whilst they continue to work. They cannot ever be allowed to keep an entore town hostage because of their disputes with you (Lekwa Municipality) as their employer.

We demand financial clarity and insight. We demand that a reputable private accounting firm audit the municipality on a monthly basis to prevent the current mismanagement of funds. We further demand that when said oudits bring to light irregularities that this be investigated and that parties guilty of theft or irregular spending, must be criminally charged.

We demand that you pay Eskom so that we can be done with Lekwa shedding. This Lekwa shedding is costing local businesses and farms more that they can afford, It is resulting in job losses and eventually the closing of many businesses.

We urge you to take these demands very seriously. We will no longer sit by and watch our beautiful town be destroyed by incompetent unwilling corrupt officials. The change starts today.

From an extremely fed up and gatvol community.

The demands mention that the Mayor does not even reside in Lekwa but in Heidelberg. The Bulletin was told that during election time the current mayor used a fictitious address to register in Lekwa. This came to light when residents started dumping their refuse at his address only to be told that the residents there has no knowledge of him nor are they acquainted with him.

During the past week municipal worker also took to the streets on a far more violent manner to protest the municipalities unwillingness and ultimate refusal to implement wage the outcomes of the collective wage negotiations. In simple terms, they refused to allow increase for the workers.

On Wednesday, the municipal workers tried to intimidate the residents of Standerton by singing, chanting, slurs and the burning of tires. The residents were unfazed and continue with their protest and handed the memorandum to a municipal representative.

On Friday the municipal workers continued their protest and the Police had to use crowd control ammunition (rubber bullets etc) to disperse the crowd.

When the Bulletin arrived in Standerton late Friday, the CBD resembled a war sone with smoke billowing from burned out tires and rubble that was littered on the streets.

None of the municipal workers wanted to speak to us on record but we were able to establish the reasons for their strike. Some were still waiting for the ANC leadership to report back as they were locked in discussions inside the municipal buildings.

Barbara Shepard, a business owner of Standerton, said to the Bulletin: “I think that our municipality dug a hole so deep that it is impossible for them to get out off. All the current service delivery problems are indicative of one thing, financial mismanagement!”

“During the last financial year R47m disappeared. No one knows where to,” she continued, “our only hope would be to have a private, accredited and trustworthy accounting firm that would manage the municipalities finances.”

The Bulletin also spoke to Angel Khanyile, DA member of parliament. She explained how the DA tried to use other avenues to try and resolve the problem but to no avail.

We also spoke to Muso Kubheka, DA Cllr at Gert Sibande district. He spoke about other problems plaguing the Lekwa municipalities and shed some light on the plight of the workers.

He released the following statement:

The Democratic Alliance (DA) calls on the MEC of Cogta, Mr Mandla Msibi to urgently intervene in the on-going violent protests in Lekwa Municipality.

Violent protests conducted by municipal workers that have been going on for the past two weeks have left the people of Lekwa without water and electricity.

The protests started two weeks back when the municipality failed to address the workers who are affiliated with South African Municipal Workers Union (SAMWU) to find solutions with regards to the 6.25% salary increment.

The dispute saw the refuse not being collected for at least 6 weeks now and electricity disconnected in Standerton.

It is also a great disappointment that while we are requested to not gather in groups over 50 people, members of SAMWU in the municipality saw it fit to actively take on a protest that broke lockdown restrictions.

Yesterday, SAMWU further on took its protest action to Morgenzon, ward 14 were they forcefully chased workers at the water treatment plant, fire fighters and the municipal satellite offices in Morgenzon.

This is an unfortunate situation since the country is still in the middle of winter and is faced with a global pandemic. Residents need to keep up with hygiene practices by washing hands and they need electricity to cook and provide warmth especially with the cold front in the country.

As the DA, we condemn any violence or acts of intimidation in protests and we discourage any forms of breaking the law. We will write to MEC Msibi requesting him to take urgent action in the matter, residents of Lekwa cannot continue to live in such a state.