Piet Marais or “Oom Piet” as we all knew him passed away on Wednesday 7 April.

Oom Piet struggled with stomach problems and eventually he lost the fight against stomach cancer.

The Bulletin had several encounters with Piet Marais. The first time was when he had trouble with his wheelchair.

We brought the story to you of how Gert Pienaar of We Move You, surprised Piet with a new wheelchair. “Look at how I am shaking now,” is all that Piet could say

Later we covered it when he received his new prosthetic leg. He was so scared.

Hannelie de Jager, part of the Bulletin family, introduced us to oom Piet. He was well known in Evander.

She wrote this about him: ”Oom Piet claimed once that he owns a great deal of participation in The Bulletin Newspaper. I laughed and asked why he would claim such a statement? He abruptly responded by saying “Cause you’re my family”… That was it. He owned us. And we have gladly adhered to this adoption. And that is exactly how everyone at the Bulletin respected and love oom Piet.

Whenever he would call (on the most inconvenient times sometimes) we would respond to the urgency of the hunker for Coke and Marshmallows or just a chat on how we are and when is our next visit. When it was the still printed edition, oom Piet would take it upon himself to personally distribute copies. He did it with great pride.

Oom Piet the Bulletin salutes you for your ever grateful humble attitude towards life. You knew life in a different way. You taught me to live in A moment… We gonna miss our visits under the tree… But when we pass there, we will still hear you whistling and we will know that all is still well. You’re safe at home.”

For those that met oom Piet, He left a lasting impression on all. He struggled with the wheelchair but never complained. We saw him once filling bags of stone for building while sitting flat on the ground.

He could teach us all something about being humble.

Oom Piet, where you are now there are no prosthetic legs or wheelchairs. We will meet again.

Here are two articles that we placed regarding Oom Piet:

The first one was placed in Afrikaans.

Pieter Marais or rather “Oom Piet” as he is fondly known by all has been without a leg for a number of years. Evander residents will know Oom Piet as the friendly guy in the wheelchair that is often moving about in the streets.

Oom Piet moves backwards in his chair as his left arm cant really propel the wheelchair as it should. Oom Piet had an accident when he was working for a security firm and he fell into a big hole. He received very little help if none at all from the security firm that employed him at that stage. They stopped paying his salary and one day just casually informed him that he wasn’t working for them and hadn’t been working for them for a very long time.

The Bulletin has vowed to pursue the matter. He also did not receive any workman’s compensation for the loss of his leg.

The impact that this has made on his life was tremendous but still Oom Piet chose to make the best of it. He stayed in a small home build dwelling near Evander club for a while until the premises were sold. He built that dwelling with his own hands. Oom Piet had to supplement his income by selling sand and stone and anything else that he could lay his hands on. He would sit flat on the ground while filling the heavy bags for customers.

The one thing that Oom Piet always wanted is to walk again. This yearning is now a reality. Oom Piet received a leg!

The Bulletin received a call in January from a Doctor that said she lost Oom Piet’s number but kept the Bulletin’s article (Dated 22 September 2017, Oom Piet oorstelp van vreugde) on file and thought that the Bulletin might still have contact with Oom Piet. The Workmens Compensation Commissioner approved a leg for him. Wheels were set in motion and Oom Piet was told to dress up, the Bulletin wanted to surprise him with a nice lunch at one of the local restaurants.

His surprise turned to tears of joy as they entered the Medforum building and he saw Hannelie de Jager and Elmarie van Huyssteen waiting for him.

In his true fashion he made a lot of noise as he entered Pieter Botha’s practice. He was shaking like a leave in anticipation. “Look at my hands” said Oom Piet, “I can’t hold them still.”

The first two meetings were used to measure the part of the leg that was left and to make a mould of the stump.

Then came the big day, Oom Piet had to fit the leg and walk his first steps in a number of years. On the way there he asked, “Can’t we rather leave it?” Oom Piet was scared! It was D-day. Once the leg was fitted the big moment came. “Stand on your own,” said Pieter, “leave your crutches’” Oom Piet responded with “I’m scared!”

The effort to walk was strenuous and scary. Oom Piet persevered and gave the first steps. Everybody was crying. It took Oom Piet a long time to build up courage enough to leave the crutches but he finally did it for a few steps.

Oom Piet was sent home with the leg to practice and will receive the final leg in a few weeks’ time. The road ahead is still full of obstacles as Oom Piet would need therapy for the leg and enough practice.

One thing is for certain. Oom Piet will continue to be seen in Evander. He will continue to prove to people that a disability does not necessarily mean the end of the road and as he says it “YOU must make the best of it!” 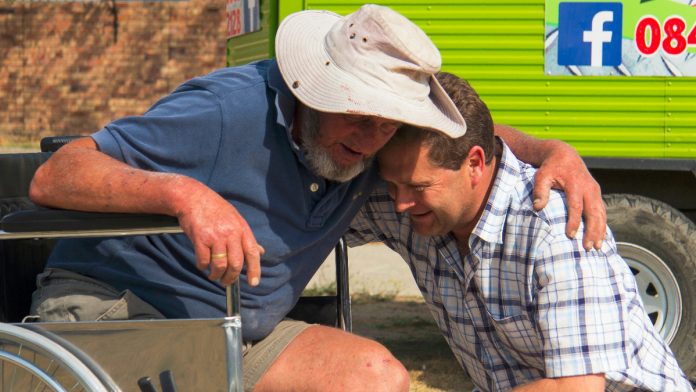