Dries and Irene Minnie, victims of the COVID pandemic
D

Reporting on stories is what newspapers do most of the time. As a reporter, I always hope that I do not have to report on people close to me or people that I know well.

Today I bring you the sad news of Dries and Irene Minnie. This year on 6 February they would have celebrated their 50th wedding anniversary. Unfortunately, due to illness, both Irene and Dries passed away before the big celebration. Irene passed away on the 22nd of January 2021 and Andries (Dries) passed away on the 3rd of February 2021.

They leave behind three daughters, Adelaine, Jackie and Deidre. Their two sons-in-law’s, Gawie and Justin, and their grandchildren, Juan, Cameron, Ruben and Amy-Leigh. They were also fondly known as “Mom” and “Dad” to a few extra children (friends) and “Ouma” and “Oupa” to a few more.

I asked Jackie to write down a short history of Dries and Irene. Thank you to Jackie, Adelaine and Deidre for the story.

We would also like to extend our condolences to them all for the loss of both parents in such a short time.

Although I already used some of their story in the intro, I place the rest here:

37 years ago, Dries and Irene Minnie along with their three daughters moved to Secunda. Both started working at Sasol and for several years Irene also worked for two audit companies in town.

Irene loved people and visiting with friends and family meant so much to her. She could talk for hours and hours. Her incredible memory for detail was shared with every story she told. Irene loved telling stories and all the children in the family have fond memories of these times spent with her.

She was a bubbly person always filled with laughter. Irene was described as such an incredible lady, so full of joy and always ready with a smile and an open door. Anyone was welcome in the house, and often a room was shared for months with whoever needed it and there was always another cup of coffee or plate of food to be had.

Many thought of her as their second mom, the mother hen looking after all her chicks. Her kindness, empathy, and caring will be missed. Irene’s love for cooking, inspired by Master Chef, ensured that we shared many tasty meals around her table. Her grandchildren fondly remember how her house had no rules except when Master Chef or Tour De France was on.

She loved books and loved to cuddle with her grandchildren reading to them.

Where Irene is remembered as the mother and storyteller, Dries is remembered as the worker. He took great pride in his work in the Mines and always ensured the work was done properly and safely. Safety was so important to him and he spent many years on the Mine’s Proto Teams looking out for others.

He worked for his friends. If anyone had a broken car, needed welding, electrical or anything else fixed Dries was there. He did not hesitate to help a friend in need no matter what day or time it was. He was not only passionate about his work but with the time he spent with his daughters and grandchildren, talking, playing board games or building things.

He loved his garden, photography and his painting and found much peace in his hobbies. After all the years of walking on the mines, he enjoyed his park walks and his tenacity was seen there too as he would clear away branches that would be on the path to make it easier for all the runners and walkers.

Their love and caring for others were also seen in servitude through their work with the church and the various charities they helped. The house was always full of things to be donated, and they spent many hours driving all over to ensure that these were distributed to those in need. When times called for it, they would take from their cupboard to give to those who needed it more. Irene would serve teas and Dries would be doing repairs at the church.

Irene and Dries both loved deeply and treasured every moment they spent with their family and friends. We know that heaven has become a lot noisier as Irene catches up with all her friends, and Dries is walking around checking to make sure everything is fine and in working order. We know you were always a team and could not be kept apart.

Mom and Dad, you are deeply loved and missed every day. You filled a big space in our lives and hearts, and now we are filling those spaces with our special memories of you. 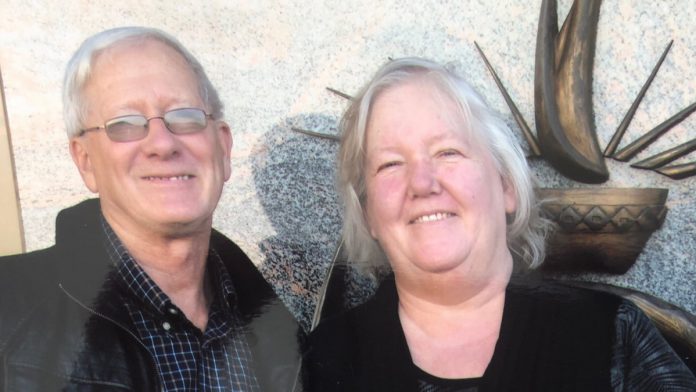 Dries and Irene Minnie, victims of the COVID pandemic