Everyone is familiar with the name Tanya Williams and if you are not, she was better known as the DHL lady to some. It is with a sad heart to say that the wonderful Secunda DHL branch has closed down after 25 and a half years.

Tanya and her husband lived in Evander and then moved to Secunda. They have been in the area since 1956. During the years Tanya has had a love for sales.

“I loved doing sales because in the mornings I could work and the afternoons I could spend with my kids,” she said.

I listened to Tanya speak about her career when she handed me a piece of paper. This paper had all her accomplishments written down and it was inspiring to see all her triumphs during the 60 years she worked.

From 1972 – 1977 Tanya was the Area Manager for Evander Cosmetics. She won a bracelet for her sales.

She moved onto Swipe as an Area Manager and in 1979 won a trip to Greece and in 1981 won another trip to America.

She moved on from Swipe and again Tanya won a car.

After that they owned two Cardies stores.

When she started the DHL franchise in Secunda she had two clients: one spending nothing and another spending R 1000 a month.

All of the jobs Tanya has had, she always saw in the newspaper.

The DHL franchise was also in the newspaper and the advertisement read: “Soek ‘n jong dame, dinamies…”

So, she phoned the lady from DHL and said:

‘The lady came to Secunda from Middelburg for two days to train Tanya. She sat in the car and Tanya went into Sasol.”

“There was one lady that said to me: “Where is that other gentleman? He knew what he was doing. You don’t know what you are doing!”

I asked Tanya if she had any stories to tell and caught her off guard.

“We would send medication today and tomorrow it’ll be in England. That really shocked the customer,” she said.

READ ALSO: It’s time we all called out the perpetrators of gender-based violence

“One time a customer phoned in and said:

My staff member replied: “Yes and I am Mickey Mouse.”

We laughed so much!

Sometimes people asked if they could send animals.

We have been sworn at but we have had more laughs than anything else!”

All of a sudden, her face lit up and she said:

“Oh, there is something brilliant!”

“One of the amazing things that happened was when the Knysna fires happened, the one lady who worked with me, Marinda asked one of the Afriforum people to help us with donations. It was unbelievable! Before we knew it a group of people were here at my little branch and we loaded trucks full of donations. My whole backyard was full. The people of the area are amazing! The Afriforum group rounded up some members and everyone jumped in to help! That to me was a highlight! You think Secunda is small but boy do they have good hearts!”

When asked about the decision to close the Secunda DHL branch down:

“I prayed for a year about closing. I did not know whether to stop or not. God is so good. I closed the branch down end of February and the lockdown happened. I was grateful about the decision,” she said.

It is clear that nothing will stop Tanya and that she will enjoy her retirement with her husband.

You will be missed! All the best! 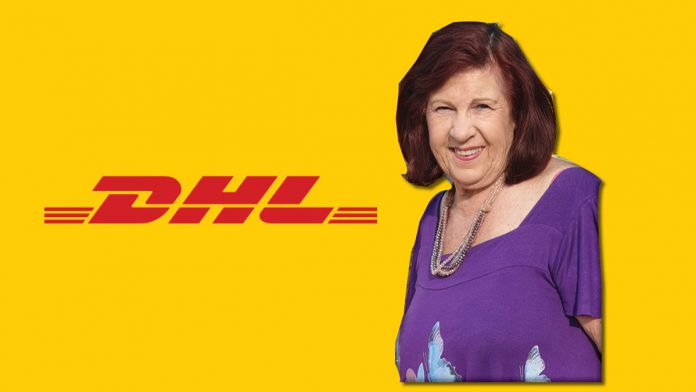