In our community there is a community most people choose to ignore or if they do see them, just look away. This community would be our disabled community.

In the beginning of the year, a voice of calm in the silence called out into the never-ending rush of what is life. Lezahn Greeff, neé Boshoff, heard the voice and answered its call.

Lezahn grew up in Secunda and has always been passionate about tennis. So passionate that she turned it into her career as a tennis coach.

The voice of calm in the silence was the voice of one Susan van Niekerk. Susan was in a car accident when she was a young girl. The car accident is the cause that she is a paraplegic today.

When I met Susan, the first thing I saw was one of the biggest, warmest smiles one can imagine. She is an incredibly intelligent and welcoming young woman.

It was Susan’s plight that Lezahn heard in the beginning of the year and by the end of February coach and tennis player were on the court training.

Susan is Lezahn’s first disabled player but nothing could or can stop these two phenomenal women.

Lezahn contacted Tennis SA during the lockdown and asked for assistance and direction from the organisation. Her call was answered by Tennis SA.

Patrick Selepe visited Secunda to teach player and coach some tips and tricks to perform at top levels in wheelchair tennis.

Patrick is well-known in the tennis world as he was the first official with a disability to work as a chair umpire in the South African Davis Cup competition in 2015.

Patrick is also a retired wheelchair tennis player and has been involved in the development of the sport.

On the day Patrick visited Secunda, he did not hold back on coaching and advice. He let Susan go through different drills and would stop and calmly (and excitedly) talk her through the drill again, all while including Lezahn in the training.

He would show the difference one little adjustment would make in Susan’s training and make sure that Lezahn understood why the adjustment made such a difference.

Susan looks up to Mariska Venter. Mariska was the same age as Susan when she started playing tennis and by the time she was 18, she was ranked no. 1 in the world for U/18 junior girls and currently she is ranked second in South African Women’s Wheelchair tennis.

Lezahn and Susan are working extremely hard to bring awareness of this sport into the community.

In order for Lezahn and Susan to receive funding from Tennis SA, Lezahn will need five students to train and Susan will need 4 team mates to practice with and against. One of the amazing things Tennis SA will also do once more children and adults from the community are involved, is to donate the wheelchairs needed to play tennis in.

This is not a blithe but rather a remedy to the community at large… A remedy because Susan is teaching us that no matter what life throws your way, you can always beat the odds and fight back! 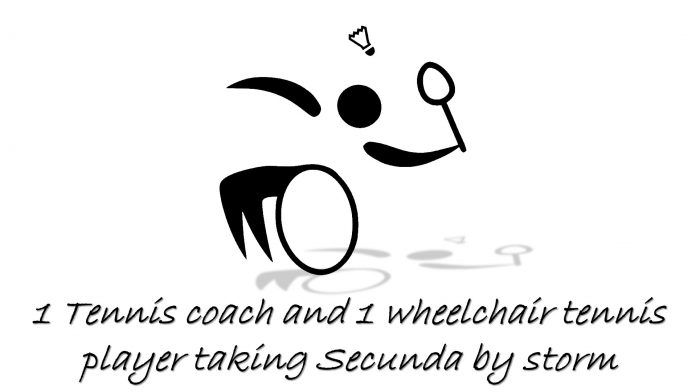