Secunda beat Middelburg  49-7 in front of a packed pavilion. Everybody was eager to see some rugby again and they were treated to an excellent game of running rugby.

Middelburg started the game with a kick-off and attacked immediately but Secunda retaliated with a move that nearly resulted in a try. Unfortunately, poor handling resulted in a knock-on and the try was averted.

A second possible try was also lost due to poor handling by Secunda.

Secunda’s lineouts were executed with precision and only one lineout was lost but one was won from their opponents. Middelburg contested well in the lineouts but was no real match for the long Secunda jumpers. Secunda’s first try came from a well-executed line out.

Middelburg put up a brave fight and attacked Secunda with determination but the defences were a little too good and they struggled to break through. Middelburg managed to run a few good line balls but Secunda’s defenced managed to stop any tries.

The handling of Secunda improved after the initial few fumbles and only a few incidents of poor handling were noted as the game progressed. The second try was a result of good ball handling by Secunda.

Middelburg managed to force Secunda to commit a few fouls by falling over the ball, in the rucks and were awarded penalties against Secunda.

Both teams’ packs mauled well and drove into their opponents, testing the defences. Secunda’s front pack pushed into Middelburg’s pack creating space for the backline to score yet another try.

Most of the tries scored were not converted and Secunda will have to address the issue. A good and reliable kicker is essential in winning games.

The team from Middelburg managed to score a consolation try near the end of the game. This came with a clear lapse in concentration from Secunda.

Secunda is known for discipline on the field and in a bizarre few minutes managed to receive several penalties directed against them while attacking in their opponent’s quarter.

Middelburg never gave up although they were playing against a stronger team.

The overall performance of the teams was good without major problems. Secunda must look at their play on the ground when securing the ball as this was the biggest receiver of penalties.

The scrums were strong and Secunda managed to push their counterparts back on several occasions.

The lineouts were contested well by both teams but Secunda managed to disrupt most of Middelburg’s lineouts while securing nearly all of their own.

In the back, the backline impressed with their determination. The ball handling was good overall with only a few incidents where the ball was lost due to poor handling.

The ball was cleared fast and accurate around the scrums and the backline always had plans to run with the ball.

The next game will be played this Saturday against Newcastle in Secunda’s first away game of the season. 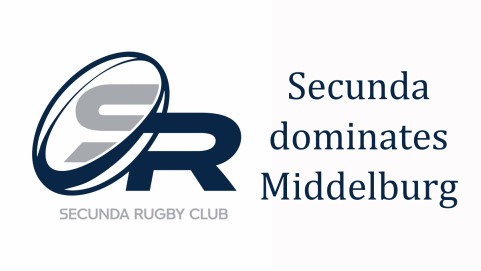