SportReturn of the Big Guns
Sport

Return of the Big Guns
R

Graceland was a hive of activity as the “Return of the Big Guns” was launched on Tuesday 9 March 2021.

Boxing fans are in for a treat with a six-bout tournament coming to Graceland Casino, Secunda on March 20 that features the likes of Hector “Hekkie” Budler and Xolisani “Nomeva” Ndongeni.

The tournament has been dubbed the Return of the Big Guns because the sport returns to its spiritual home in Mpumalanga after a long absence and it will also be the first time in two years that Hekkie squares up in a competitive bout.

The former WBA and IBF world light flyweight champion is involved in the main bout against Mushin Kizota of Tanzania. The diminutive pugilist will want to mark his return to the ring with a win in the 10-round International Flyweight match against the Tanzanian.

Other mouthwatering fights on the bill include: Xolisani “Nomeva” Ndogeni against Byson Gwayani of Malawi in a 10-round International Lightweight bout. In the only female bout of the day, Noxolo Makhanavu will defend her national title against Smangele Hadebe in 10 rounds. In a 10-round Mpumalanga Derby, Sam Sithole will fight Xolani Mgidi. The boxing spectacle will conclude with two four-round bouts. The first one will feature Talent Baloi against Sando Jackson of Malawi in a lightweight bout and conclude with Njabulo Merile squaring up against Nkululeko Mdletshe in a junior lightweight bout.

Here is her full speach:

As the Department of Culture, Sport and Recreation, we are excited to be part of a historic and groundbreaking Boxing Tournament in Mpumalanga.

One year ago, South Africa looked a lot different than it does today. The country recorded its first Covid-19 case and it was the beginning of a long journey in the fight against the pandemic. Life changed as we knew it. Subsequently, all sporting activities were suspended in an effort to preserve lives and deliver a TKO victory against the virus.

Ladies and gentlemen, credit goes to the National Government for putting mechanisms in place to avoid a health crisis. It was not easy but the Government has done a sterling job in the face of the pandemic.

Programme Director, it is for this reason that The Return of the Big Guns Tournament is a historic and groundbreaking Tournament as a year ago a gathering of this nature looked impossible. Truth be told, we were not sure if normalcy would ever return. The boxing extravaganza was scheduled for last year but it could not take place because of the outbreak of Covid-19.

The Return of the Big Guns is not just any tournament but one that features the best in the sport and it will go a long way in satisfying all the needs of boxing fans. The tournament features both professional and amateur boxers. It is also encouraging to note that the tournament has female and Mpumalanga boxers in the bill.

Ladies and Gentlemen, the Return of the Big Guns is a six-bout tournament, which is headlined by an International Flyweight bout between Hector “Hekkie“ Budler (South Africa) and Mushin Kizota (Tanzania). Hekkie is a national boxing icon and it is an honour to have him take part in the tournament at an iconic venue for boxing in the province, that is, Graceland Casino in Secunda. It is also exciting to note that the tournament features a female bout between Noxolo Makhanya and Smangele Hadebe, who will be fighting for top honours in the SA title bout.

Government espouses the values of International Women’s Day, which was celebrated yesterday, of raising awareness about women’s equality in all sectors of life and celebrating their achievements. Malibongwe igama Lamakhosikazi! Malibongwe!

The other bouts in the tournament are:

It is only fitting that the return to boxing happens in Secunda, which is the spiritual home of the sport in this part of the country. Over the years, it has hosted some of the best fights and I have no doubt that what is in store on March 20 will find a place in the highlights reel of the best fights of all-time.

The Return of the Big Guns is more than a sporting tournament. It offers us a platform to restart the sport and also grow the local economy. Hosting it on our shores will provide much-needed cash injection into the local and help to keep jobs in the tourism sector, which has been adversely affected by Covid-19.

In conclusion, I want to thank the media for making time to hear what the Department had to say. The members of the Fourth Estate are integral in the success of the Return of the Big Guns Tournament. Thank you very much for showing interest in what the Department is doing to take sport in Mpumalanga to the next level. 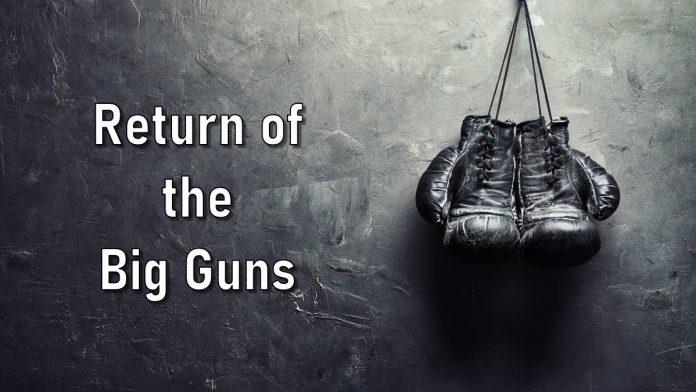 Return of the Big Guns