Water Hyacinth – Threat to our waterways and dams
W

Secunda – The dreaded Water Hyacinth (Eichornia crassipes) has now invaded the Duckpont as well as the Hammerkop dam in Secunda.

The Bulletin has been following the growth of the weed closely for the past three weeks and the rate of expansion is truly alarming.

A lot of residents are wondering how the plants ended in our systems. The question should rather be of how to eradicate this weed.

Govan Mbeki Municipality recently released an army of insects to fight this invasion. The “Groenstrook Gabbas” are also doing a sterling job of removing the Hyacinth from the dams but they really need help.

But first, we must look at why the Hyacinth is so bad for South Africa.

It is a floating water plant that grows about 20 cm high and has beautiful lilac-blue flowers with yellow markings.

The leaf stalks have air sacs that enable the plant to float, and the long feathery roots hang down into the water.

It forms dense mats in lakes, rivers and wetlands.

It does not tolerate brackish water, so is found in the upper parts of estuaries rather than near the estuary mouth.

Water Hyacinth comes from tropical South America, where it grows in rivers and lakes in the Amazon basin.

It was brought to South Africa as a decorative water plant because of its beautiful flowers.

It is an aggressive invader, especially in water bodies with high levels of nutrients.

Water Hyacinth is a successful invader because:

Water Hyacinth is a problem for people because:

Some people use Water Hyacinth as a source of fibre for making rope, baskets and paper, fodder for livestock, compost, and removing excess nutrients from the water.

To control Water Hyacinth it is important both to reduce nutrients (e.g. fertilizer, sewage) entering watercourses, as well as to remove the invasive weeds.

Small amounts of Water Hyacinth can be removed by hand or by specially designed harvesting machines.

It is not a good idea to use herbicide as this can poison other plants and is dangerous for people and wildlife. When large amounts of Water Hyacinth are killed and start to rot, this removes oxygen from the water, which can kill fish and other water creatures.

Three biological control agents have been introduced to control populations of Water Hyacinth,

The parks department of Govan Mbeki Municipality have been proactive and received a consignment of Hyacinth Planthopper to release into the affected dams in Secunda and Evander. This was done on Thursday.

The “Groenstrook Gabbas” has also been very active in fighting this invasion. They have been taking out huge amounts of Hyacinth from the dam by hand.

Lake Umuzi has now made a float available to aid in taking out the Hyacinth.

“It is going to make our work much easier,” said Rika Lambrecht of the “Groenstrook Gabbas”. 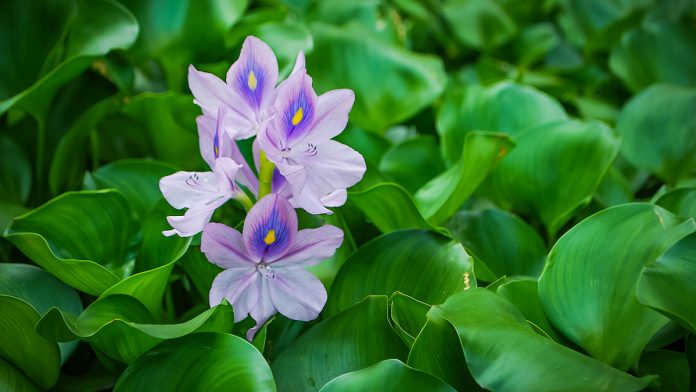