The final report on the investigation into GMM affairs in terms of Section 106(1)(b) of the Local Government Municipal Systems act 32 of 2000 was tabled in council today.

The investigation was done by Motlatsi Seleke Inc, who was appointed by the MEC on 21 November 2019.

The report paints a bleak picture of political involvement unauthorised appointments and circumvention of the Supply Chain Management as well as irregular expenditure and fruitless and wasteful expenditure.

The report exposes the tip of the iceberg of the rot that is so prevalent within Govan Mbeki Municipality.

The MEC for Cogta in Mpumalanga said in his executive summary that disciplinary action should be instituted against several officials as well as councillors.

All the information listed in the article below has been taken from the full report and is reported as such. In no way does The Bulletin claim that everything in the report is factual as there are also several allegations raised in the report. All names, claims and allegations are as it is contained within the report.

The report specifically lists, in the executive summary, Executive Mayor Councillor TY Ngxonono and MMC Cllr NE Nkosi as two of the councillors that interfered in the appointment of employees. The recommendation read that council invoked the Code of Conduct of Councillors against the two councillors.

This could mean the possible removal of the mayor from office as MMC Nkosi resigned recently. She is now filling the position that her sister occupied at the National Council of Provinces (NCOP) in a clear case of nepotism. She was never on any ANC list, according to our sources, to be promoted to the position but nabbed the position before the candidate which was earmarked for the position.

The executive summary also made mention of the irregular appointment of the CFO. The CFO is currently suspended. The CFO failed to comply with the minimum requirements prescribed in the Municipal Systems Act 32 of 2000. The CFO only managed to receive a basic level of competency as well as no employment contract and/or performance agreement within the time frame stipulated in the Act and as per council resolution.

Opposition parties strongly opposed to the appointment of the CFO and pointed out the fact that the CFO does not meet the requirements as per law.

It is even more astonishing that the assessment report used, was a report that was done for a different municipality the previous year.

The ANC used their majority vote to approve the appointment.

Page 4 of the executive summary mentioned the Deputy Director of Energy Services and recommended disciplinary action against him for signing invoices from Service Providers without proof that the services were rendered and to rendered to the satisfaction of the municipality.

The report continued to paint a picture of interference by councillors and lack of co-operation of some of the officials.

In the investigating area of appointments, it became clear that policies and current legislation were discarded in the process of appointing personnel.

Appointments were made where applicants did not meet the minimum requirements. Some were given preferential treatment.

The report showed several cases where people were appointed ahead of better qualified candidates. The appointed applicant did not meet the required minimum qualification but was still appointed.

One employee was appointed as an “Acting Plumber”, a position that he filled for 26 years. This whilst not even meeting the requirements for the position. Another was acting in a similar position for 24 years.

The findings continued to show the total disregard for council resolutions taken.

“The council resolved that consequence management should be implemented by the accounting officer against officials, particularly in the Finance Department, liable for irregular, unauthorized, wasteful and fruitless expenditure as stated in the Audit-General’s Audit Report. According to our (Motlatsi Seleke Inc) this has not been implemented despite the exorbitant irregular, unauthorized, wasteful and fruitless expenditure incurred over the two financial periods.”

Irregular extension or termination of contracts

Findings in this regard covers the following:

Having analysed the above Information and/or documentation it is clear that the contract management is a major issue within the municipality the issues of noncompliance range from:

14.3.1.2 Contracts being extended on a month to month basis without justification causing a reliance on expired contracts during disputes.

14.3.1.4 Contracts being terminated haphazardly without compliance and/or consideration of contractual obligations

The report further states that one of the greatest limitation of this investigation was the incomplete and almost placed records.

The end result of the poor contract management in the Govan Mbeki Municipality has resulted in numerous litigation cases instituted by service providers as a result of non payment of invoices for services rendered which stemmed from the contract signed between these service providers and ability.

The current claims against the municipality currently stands at R 99 238 541.90. These are only claims in regard to the interpretation or enforcement of contracts.

In the report please mention under the heading of analysis of service providers that did the interviews regarding the various investigation areas company realised that there is a trend in issues raised regarding specific service providers.

In this section, regarding the service providers, it became clear that companies were linked to some of the officials who have companies that have two directors of different companies and they are family. According to the report one of the companies was involved in supplying bogus quotes whereas another was company provided with a slightly lower quote and two others slightly higher quotes. The report read as follows: “We will leave the names of the directors, the companies owned by Mr A and Mr B respectively.”

The connection between these companies cannot be assumed to be a coincidence and in fact, there appears to be a manipulation of the three quote procurement system which would require the assistance of a departmental official acting in collusion with the supplier we buy multiple quotations are submitted as they were independent quotes to insure that is specific company receives the work (paragraph 14.6.9)

In another case the report spoke about the director of “Company A” that is directly linked to one of the Senior Technical Managers in the municipality and who facilitated most of the work that was given to Mavutha Contractors. It  also spoke of a deep rooted connection as both are active directors of “Company B” limited that was registered in 2007.

Names have not been included as the allegations have not yet been proved in a court of law.

In regards to companies above, the report on page 172 paragraph 14.7.1 stated; the seriousness of the moves abilities inability to ensure proper contract management has greatly contributed to the dire state in which the municipality find itself in.

the municipal management must report the above counsellors and the directors of the above companies to the Directorate for priority crimes investigation (Hawks) in accordance with section 34 of the Prevention and Combating of Corrupt Activities Act 12 of 2004 for possible corruption, fraud and collusion in relation to the transactions related three companies mentioned in the report.

The report is over 250 pages long, excluding any annexures.

The ANC, today, decided to use their majority and overrule proposals by the Democratic Alliance that the implicated councillors and officials be suspended and that disciplinary procedures be instituted against them. They also chose to ignore the instructions of the MEC that some councillors, officials and service providers be referred to the HAWKS for further investigation.

One can only deduce that the municipality is in deep trouble and needs urgent intervention. 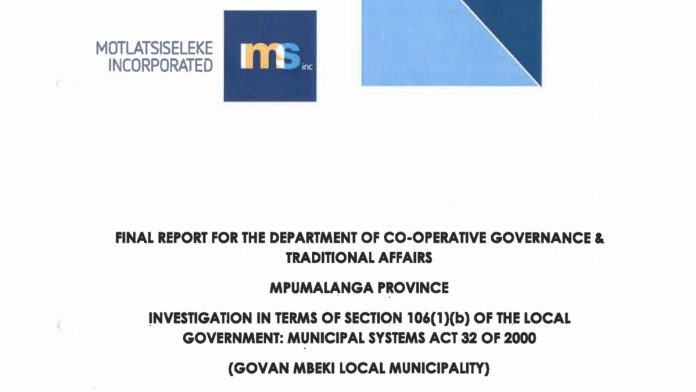