The teams of Gert Sibande U/20 and Nkangala U/20 struggled it out on a wet field. Nkangala won the game 50-14.

The rain that fell did not help the teams and made the ball slippery. The wet field no doubt did not create a field for spectacular rugby.

The game started with the Gert Sibande team (GS) taking the initiative. They started attacking the Nkangala (NK) backline from the kickoff.

The Gert Sibande team played in pink and Nkangala in black.

GS still tried to control key areas but was outplayed in every facet of the game. The first few lineouts looked like it was all GS as they won the ball on their opponent’s throw-ins. The GS lineouts slowly deteriorated at NK started to dominate the lineouts.

NK made sure that their throw-ins were accurate and also started to win some of the GS lineouts. This gave NK a huge attacking advantage. The throw-ins of the Gert Sibande team were atrocious to say the least, especially towards the latter part of the game when they used a flank to do duty at the lineouts.

Please use a PC or Laptop to view the gallery

The scrums were a nightmare for GS. The Nkangala front row was penalised for scrumming upwards, lifting the entire row as they overpowered the boys in pink towards the end of the game.

The backline of Nkangala dominated that of their counterparts. They continued to find the gaps in the Gert Sibande backline and took advantage of poor defences by GS.

It was not a complete dominance as GS showed signs of brilliance in short bursts only for Nkangala to bounce back again.

The ball-handling by both teams suffered as a result of the wet field but GS did not impress. The ball was knocked at crucial times giving Nkangala the opportunity to attack again. There were some good individual players in both teams but the team from Nkangala impressed with their gameplay and skill, especially so early in the season.

The Gert Sibande team, to their credit, had only two practise sessions before this game and it showed. This ultimately cost them the game. They were not prepared for the onslaught from Nkangala.

The Nkangala team responded positively to every lineout, scrum and penalty. They kept on looking for opportunities to play the ball while the Gert Sibande team looked tired and leaderless. They were caught napping on several occasions.

Although there were a lot of drives and mauls from the forwards, most of the game was played with the backlines.

Although the scoreboard reflected a large score difference it is our belief that both teams have the skills and players to do well in future games.

The key area should be fitness and commitment as well as handling.

The two-year break as a result of the COVID pandemic was not good for South African rugby and most probably for rugby as a whole.

There is now a gap in the feed (of young players) that rugby usually had from school, as some players have lost their appetite for rugby during the past two years and brilliant players have been lost.

The COVID break is also very visible in the two teams that played on Friday night.

Both teams will continue to grow as the year progress and rugby becomes a bit more normal in the next few months.

Good luck to both teams 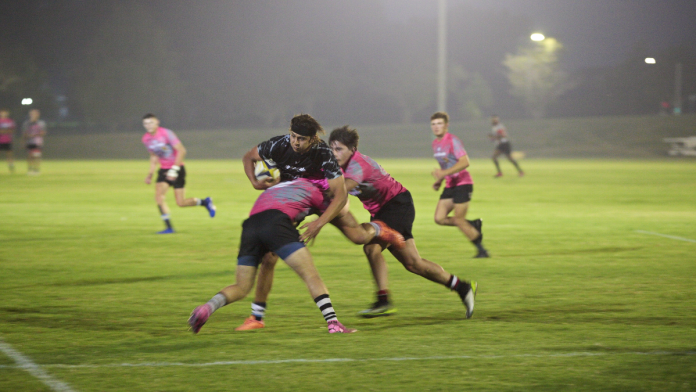