NewsFarm Murders, Calls from DA to bring back the...
News

Farm Murders, Calls from DA to bring back the rural safety units
F

Farm murders continue to be a burning point in South Africa.

While the farming community as well as several different interest groups continue to keep the issue of Farm murders in the public’s eye, the government still shows reluctance in accepting the problem.

The continual attacks on farms are threatening food security. The farm attacks are almost always brutal and often shows signs of sadistic torture. No one is spared when it comes to Farm murders, age makes no difference to the attackers.

“ANC and EFF politicians often pounce on the first opportunity to engage in any murder and turns it into a racial quagmire. It is noticeable that all politicians of the ANC and the EFF as well as the leaders of the police are very slow in responding to attacks on farms but are quick to turn any killing into a racial issue as it suits their narrative,” a Prominent farmer told The Bulletin.

The Mpumalanga Provincial Legislature convened on Friday, 27 August 2021. Jane Sithole, MPL and leader of the Democratic Alliance in Mpumalanga said that “Our farmers, the farmworkers and Farm dwellers are living in fear because this government refuses to protect them. Today they want to use the unfortunate death of the Coka brothers to actually campaign on the basis of racial hatred.”

“They mobilise on the basis of racial hatred and they continue to divide our communities instead of bringing them together,” said Jane, “They sow division instead of uniting people because they want to use that for their own narrow political gain.”

“They must bring back the rural safety units to protect our farming communities, said Jane, “one life lost is one too many.”

Jane Sithole delivered the following speech during the sitting of the Mpumalanga Provincial Legislature:

Honourable Speaker, the Democratic Alliance welcomes this debate as it is long overdue, particularly in our Province. Before I get into the debate itself, let me remind this house that in June 2015, just before the local government elections of 2016, the Mpumalanga Provincial Government established a commission of inquiry to investigate and report on the living conditions of farm dwellers.

And I quote, “It will be the duty of this commission to identify critical areas requiring our intervention, including, but not limited to issues related to the protection of human rights, safety, security of tenure, employment, access to housing and basic services, and working conditions,” as former Mpumalanga Premier David Mabuza said at that time.

He further said that the recommendations will be used to identify the interventions required by the province to address the livelihoods and living conditions of these rural families.
Guess what happened since then Hon. Speaker, NOTHING!

A whopping R10 million was set aside to remunerate members of that commission of inquiry in 2015, they earned the money, they left, and no action was taken as usual. Their report was completed in March 2016, and it is probably gathering dust somewhere in this building of the Legislature.

Today, the very same government want to pretend as if they care about the brutal killings of our farmers, farm dwellers, and farmworkers because again local government elections are approaching, and they have nothing to offer the residents of this province and the residents of Mkhondo than to fuel racial tensions for their own narrow political gain.

They are using the death of the Coka brothers (may their souls continue to rest and peace) to divide the community of Mkhondo to fuel racial tensions and to mobilize for elections on the basis of racial hatred.
For far too long the outcry on the abuses, torture, brutalities, and killing of farmers, farmworkers, and farm dwellers in the province especially in the area of Mkhondo Municipality has not been addressed because this government is not interested in addressing this issue. They are only interested in grandstanding to fuel racial hatred.

These commissions of inquiry established by the ruling party just before every election are not meant to address these issues, they are merely public relations exercises designed to place the ANC in the spotlight to look like they are doing something yet they know very well that they are doing nothing to address this issue.

Hon. Speaker, may I remind this house that it is this government that stopped the rural safety units that used to protect our farming communities. It is this government that stopped all farm patrols during the lockdown and farm killings soared including the killing of the Coka brothers and today you want the people of Mpumalanga to believe that you actually care about the killing of our farmers, farm dwellers, and farmworkers in this Province. It is a fact that this government does not care that our farming communities are under attack.

If this government continues to turn a blind eye to the plight of farmers, farm dwellers, farmworkers and their families, who are often brutally murdered, know that their blood is in your hands.

Hon. Speaker, the DA is for fairness, the DA is for the rule of law and justice must prevail in ALL farm murders including that of the Coka brothers. One life lost is one too many.

• Stop grandstanding and address the issue of the brutal killings of farmers, farm dwellers, and farmworkers
• Stop mobilizing on the basis of racial hatred
• Stop sowing divisions amongst our people
• Stop spitting hatred venom whenever you get an opportunity and
• Stop pretending to be addressing this issue because you are NOT!

How many more farmers, farmworkers, and farm dwellers must be killed before this government stops the race-baiting and realize that these are people who leave families reeling behind. From Dipaleseng to Mbombela to Emakhazeni to Mkhondo, wake up and smell the blood of farmers, farm dwellers, and farm workers across the Province.

In conclusion, Hon. Speaker, I find it shocking that even though Agri SA’s Christo van der Rheede appealed to Deputy President, DD Mabuza, to facilitate a meeting between the farmers and the community of Mkhondo to reduce the racial tensions, this still did not happen to prove that you don’t care and you are not interested in addressing this issue.

Bring back the rural safety units to protect our farming communities.

Farm murders are not prioritised as a priority crime!

As this article was written the following message was circulated. Courtesy of SouthAfricaToday.net:

A farm attack took place on the night of 27 August 2021, in Kalbasfontein, in Westonaria, East of Fochville, in the Gauteng province of South Africa. A woman, Hanlie Geldenhuis was shot by an unknown number of attackers.

Hanlie Geldenhuis was admitted to the hospital after the attack and is in serious condition. She has two bullet wounds to her abdomen and will require surgery to recover the bullets.

She has received a blood transfusion and her blood pressure is improving but has been transferred to Leratong Hospital in Krugersdorp.

She is in critical condition.

There is no other information available at this stage.

Police are investigating but there have been no arrests.

One life lost is one too many 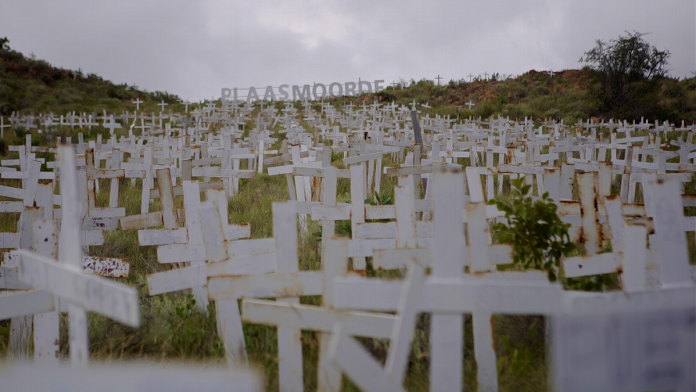 Farm Murders, Calls from DA to bring back the rural safety units