NewsFarm murder reality! President Ramaphosa, How many more must...
News

President Ramaphosa, how many more must die? The banner across the road at Normandien is a grim reminder of how vulnerable farmers are. Farm murders have increased in 2020.

Saturday night, the 29th of August, will forever be remembered as the night that a senseless murder took place in Normandien KZN.

Glen and Vida Rafferty were shot and killed when they returned from Newcastle at around ten in the evening.

Both were shot numerous times by an unknown number of attackers. One of their dogs was also shot in the attack.

Glen and Vida was laid to rest today in Normandien in a private ceremony. People from all over gathered to show their support and to protest against farm murders.

The crosses represented a farm murder in South Africa. It is a brutal reminder of how many murders there have been.

Farm murders have seen a surge this year despite the government’s denial.

The latest crime statistics released by SAPS show a sharp increase in farm attacks this year, validating the concerns raised by rural citizens. A series of vicious crimes have turned the media spotlight on the farming community and its struggles to overcome a wave of brutality.

HOW MANY FARM ATTACKS HAS THERE BEEN IN SOUTH AFRICA?

According to recently released data, farm attacks have shot-up in the first six months of 2020. Police statistics indicate that, despite a national lockdown, criminals have taken the pandemic chaos as an opportunity:

The Democratic Alliance (DA) sponsored a motion in parliament recently to debate the surge in farm attacks and murders. They also tabled once again a plan for rural safety.

Business Insider South Africa (November 19, 2019) wrote on how South Africa became one of the most murderous countries in the world.

The safety of South African citizens has been neglected by the government and even more so that of our farmers.

Food for Mzanzi wrote in an article published on July 31: “The spate of farm attacks and murders and especially the recent murders in the Vaalharts area, as well as the high levels of property-related crime, have brought the mood virtually to breaking point.” These were the words of Tommie Esterhuyse, chairperson of Agri SA’s centre of excellence: rural safety after the Vaalharts murders.

He said that it had become increasingly difficult to manage the situation and farmers and their workers have had enough. Esterhuyse says, “These and other incidents of violence which affect the farming community as well as fellow South Africans on a daily basis are strongly condemned.”

Agri SA said in a statement released on September 3:

The incidence of farm attacks and the murder of farmers and farm workers recently received considerable attention at government level and during a debate in Parliament in the past week. “Agri SA welcomes the condemnation of this serious crime by various government officials. There seems to be a new wave of condemnation of farm attacks and widespread acknowledgement of this as a problem, adding new momentum to efforts at government level to find solutions in this regard. The test is ultimately whether government will act decisively and fully implement existing policy and the Rural Safety Strategy to combat farm attacks,” said Pierre Vercueil, President of Agri SA.

Agri SA also welcomed the announcement by Deputy President David Mabuza that a meeting would be scheduled on Friday with the Inter-Ministerial Committee on Land Reform and Agriculture to discuss and seek solutions regarding the recent increase in farm murders and violent attacks. “We also welcome the Deputy President and Minister of Agriculture, Land Reform and Rural Development’s condemnation of farm attacks and their acknowledgement of the important role that agriculture plays in the economy,” said Vercueil.

The Minister of Police yesterday visited the Normandien district after the double murder during the weekend, where he met with role players and the farming community. According to Kwanalu, an affiliate of Agri SA, farmers and farm workers had an opportunity to share their concern over farm attacks with the minister. The minister said he would be back in two weeks’ time to assess the progress made. The community also intended to hold a prayer meeting this morning.

The chair of the Portfolio Committee for Agriculture, Land Reform and Rural Development, Inkosi Mandela, said in Parliament that farm attacks undermine food security, job creation and the national economy and that farmers and farm workers were particularly vulnerable because of long distances from essential services and therefore required the necessary police protection. Agri SA agrees with his views and therefore it is important that farmers and farm workers should receive the necessary protection. According to Vercueil, agriculture is one of the economic sectors with whom the most fellow citizens have a daily appointment with around the table and ensures that we have sufficient food.

“The importance of protecting farmers and farm workers as an asset for the country because of their contribution towards national stability, cannot be disputed. To this end, Agri SA will work with the police to ensure full implementation of the Rural Safety Strategy and the creation of an agriculture-friendly reservist system.” With reference to the call by Police Portfolio Committee Chair Tina Joemat-Pettersson that police should protect rural areas, Tommie Esterhuyse, the chair of Agri SA’s Centre of Excellence: Rural Safety, said “Agri SA has already held discussions with the police and looks forward to further cooperation within the agreed-upon task teams in this regard”.

Being a Farmer in South Africa has become one of the most dangerous professions. The whole agricultural sector is under threat and this will only impact negatively on food security, not only for South Africa but for the African continent. 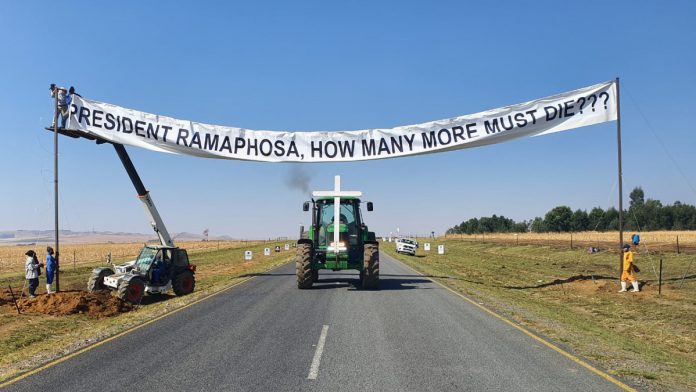 Farm murder reality! President Ramaphosa, How many more must die?