Several cases against drug suspected dealers and users as well as people in possession of drugs were reported by the Bulletin.

In an article called “Secunda drug trader pleads guilty” it was reported that Belinda Swart pleaded guilty to the possession of a dangerous dependent producing substance (methamphetamine). She was previously arrested by the Hawks in 2018 for contravention of the Drugs and Drugs Trafficking Act. Swart was found guilty in August 2018 and sentenced to 3 years imprisonment of which 1 year and 6 months were suspended for 5 years, with the choice of acknowledgement of guilty of R12 000.00.

In another article The Bulletin reported on six suspects, five foreign nationals and a local aged between 31 and 34 that were due to appear before the Bethal Magistrates court on Tuesday, 29 June 2021. This was after intelligence-driven information gathering was conducted and presented before court resulting in a warrant of arrest being issued. During the arrest, cash and drugs were confiscated.

Here is the full memorandum as delivered by Jordaan:

As you are very well aware, drugs and substance abuse have a formidably murderous presence amongst the youths in Secunda and in the larger Govan Mbeki area.

A number of years ago, the Democratic Alliance Youth had marched to this very location to demand from the South African Police Service the establishment of an anti-drug unit that will tackle drug abuse, and drug-related crimes and arrest drug dealers in our communities. This never materialized.

Yet today, the problem is worse than it has ever been. We see young adults begging at stop signs or shopping centres. Others end up dead on sidewalks. Drugs are being used out in the open and are dealt with in our schools, from drug dens at public transport hubs and even houses and shops that are camouflaged to appear ordinary in residential neighbourhoods and shopping centres.

As young people, we do not see SAPS doing much about this issue. What we do see, is our friends being lost to drugs – ending up in jail and on the streets for stealing their families blind, skinny and full of marks and sores, dying a little bit every day in front of our eyes. Our community is under siege by the scale of drug availability and abuse.

We are asking you to uphold your oath – to create a safe and secure environment for all the people of South Africa. We demand that you

Jordaan said in an earlier interview (on Saturday) that it is easy to obtain drugs in GMM as drugs can be bought from Bus stops, Filling stations and Taxi ranks to name but a few.

“We are tired of seeing friends and family die as a result of substance abuse,” said Jordaan, “our youth are suffering from the drug pandemic! In many cases, drugs are a death sentence.”

“Not having jobs will result in many struggles for the youth such as depression, suicide and drug abuse. The South African Police are not the enemy of the people but their bosses namely the South African Government,” concluded Nicholas.

The DA will also submit a petition to the police at a future date. The petition can be accessed HERE 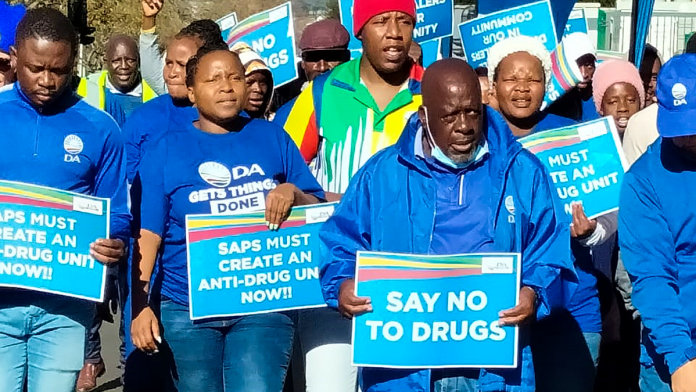