NewsEsteemed Councillor, 1 and only Ciska Jordaan listens to...
News

Esteemed Councillor, 1 and only Ciska Jordaan listens to the beating drum of the community’s heart
E

Ciska Jordaan, or better known locally as “Councillor Jordaan,” is a fast, young, up and coming woman setting an example for aspiring young women from all walks of life.

She grew up in Secunda and was a proud student of Laerskool Goedehoop. “My photo is still in the foyer of the school and as it is one of my voting stations, I enjoy seeing “little Ciska” there when I go visit the school,” Ciska smiled proudly.

In Grade 9, she immigrated with her family to Saudi Arabia, where she attended an American International school; Dhahran School, which was situated on the American Embassy grounds.

It was here, that Ciska learnt about diverse cultures from all around the world. Probably the most striking lesson learnt was that of tolerance. Unbeknownst to her, this lesson prepared her for career in politics today.

After graduating from Dhahran School in Saudi Arabia, she returned home to her beloved South Africa to pursue a BA degree in Psychology, French and Philosophy at the University of Pretoria.

“I was a typical student but my studies never suffered,” said Ciska.

Besides taking part in various student past times, she also was very diligent in earning her keep by tutoring children and waitressing during her Uni days.

Having qualified, Ciska was in limbo as to which direction her career should now take.

She returned to her hometown, Secunda where she worked as a waitress at Graceland and did promotional campaigns for Clicks.

She felt she needed to challenge herself and expand her horizons. She thus started to work at a remedial school.

During her time at the remedial school, a friend of hers, Pierre Bosch involved her as an activist for the Democratic Alliance (DA) in 2014.

Working as a volunteer for the DA encapsulated her and jump started the political fire in her that she never knew existed.

She volunteered for a year and a half and sat through eight gruelling interviews before she became a Proportional Representative Councillor in 2015.

2016 was hailed in by her appointment as Ward Councillor for the Democratic Alliance in Govan Mbeki Municipality.

Ciska sat with conflict within her. Should she stay with the remedial school or give up this life changing political career? With great regret she had to make a crucial career decision thereby leaving her at a loggerhead…

In Ciska’s first month of being a Ward Councillor she felt like a “headless chicken”. The wrath of responsibility had hit her as she realised her elevated position now demanded so much more of her expertise.

She has since grown into her position as Ward Councillor and also the Caucus Leader for the Democratic Alliance in Govan Mbeki Municipality.

Ciska was thus included in this programme – Women in Leadership.

Her personal life entails a marriage, with two dogs, a Golden Retriever and a Great Dane. Ciska’s support structure and better half, Jonathan has been at her side and supported her every step of her journey. This is the depiction of true love.

Ciska’s future moving forward seems a bright one. Her aspiration for life and her passion towards the community will surely lead her journey upward within political realm! 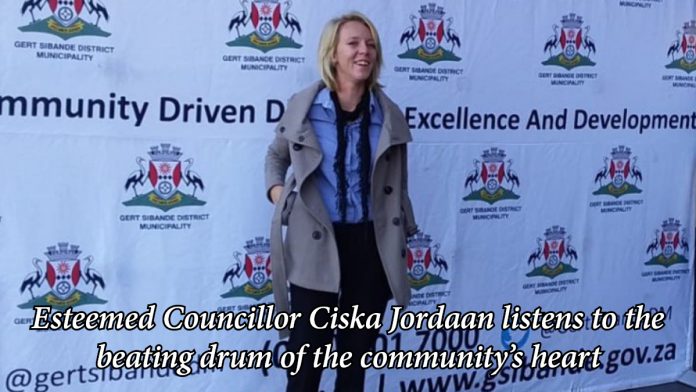