Saturday was a big day for the young players from Emba and Leandra. They played in a knockout game to determine who would be playing at Vosloosrust next weekend.

Good luck to our boys from eMbalenhle, Carara Kicks.

The day was also to honour one of their own. Moeketsi Diago is the first player in the Lake Umuzi Soccer Challenge to be selected as part of the Most Valued Player (MVP) Master Class group.

Moeketsi does not only excel on the soccer field he also studies hard. He achieved excellent results in his school work. He achieved a “level 7” in 7 of his 10 subjects. He is currently in grade 7 at Shapeve Primary School.

“The MVP focuses on young children achieving good results in both the academic fields as well as the sports fields.” Said Jacob Mtekwenda, “this achievement may land him a scholarship at university if he keep this up.”

“The MVP program will provide guidance to the selected indivuduals.” Said Jacob, “The program starts from under 9 untill under 17.”

Moeketsi received a cash prize and a trophy from Jacob acknowledging his achievement. It was also his last local game.

He will start with the MVP program next season. 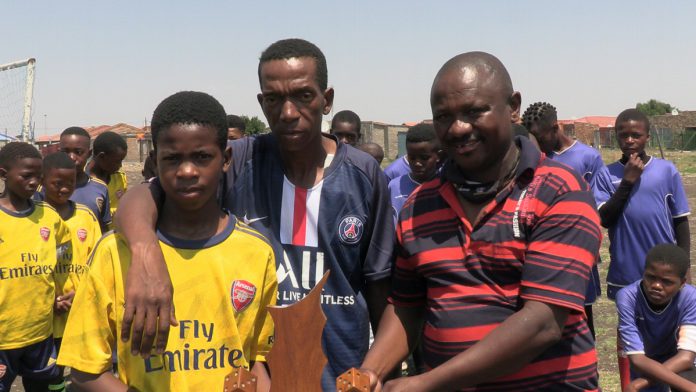