Hennie Rademeyer welcomed everybody to the opening. Unfortunately, the all too familiar Bethal load shedding kicked in just as the function started but it did not place a damper on the enthusiasm of the Rademeyer team.

The reception and Florist area were buzzing with activity as guests mingled discussing the new venture of Hennie and Michelle.

Hennie teamed up with Pieter van der Merwe to open Rademeyer Funeral Parlour. Hennie is well known in the area and industry and will compete in a very competitive environment as there are already 23 other funeral parlours in the Bethal/Emzinoni area. It is not known if all of the parlours are registered etc though.

Hennie thanked the guests for coming and expressed his desire to bring something different to area. “I would like to think that we are part of the family,” said Hennie.

They will be offering a full-service package as well as insurance products. “We will accept your Funeral books as well.”

Every guest was taken on a tour of the facilities and platters with snacks were served.

Learn more about the Parlour on their Facebook HERE

The Bulletin recently reported on the Funeral of Oom Piet. Hennie Rademeyer was the Undertaker. We at the Bulletin were impressed with the way that Hennie conducted the funeral. We would like to wish Hennie, Pieter and Michelle all the best with the new venture.

If the funeral of Oom Piet was anything to go by, then Rademeyer Funeral Parlour will be a huge success and an asset to the community 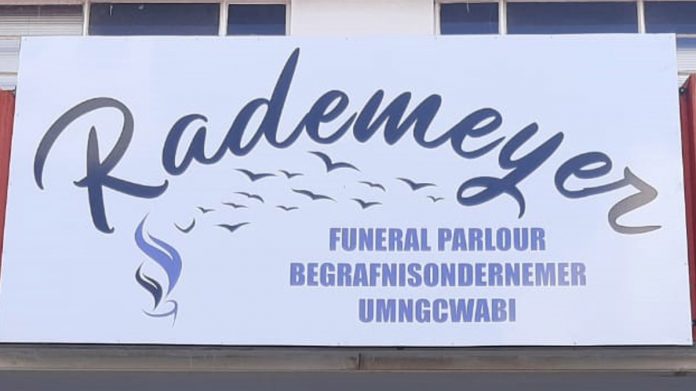