Ané recognised and awarded as top influential woman in media
A

When I think of Ané, my mind doesn’t automatically jump to women in media or journalist, I think formidable blonde who is willing to stand on the back of a moving bakkie in the middle of a location strike in order to get the best shot! She is a woman in media and she is a journalist, but she is so much more than that.

Ané is currently studying journalism through the National Council for the Training of Journalists (NCTJ) based in London and obtained a diploma in Viral Media Marketing.

Her earlier career started out with Sasol, which quickly progressed to the hotel industry and even faster into the sky, as part of the cabin crew for the renowned Middle Eastern airline, Emirates.

Ané spent many years travelling the world, where she gained the valuable skill of dealing with people from diverse cultures. Most of her career was spent interacting with people, however her passion and heart always stayed with journalism and working in media production.

Ané: “I am passionate about public engagement and sharing experiences with people… through various media forms we are able to share information and investigate issues of relevance to the consumer.”

After an astounding career with Emirates, Ané made a full circle back to journalism – an industry she is so completely passionate about.

Ané is one of those rare gems few have the honour to know – an alpha female who is strong in character yet compassionate at heart.

Her journey in journalism has allowed her to interact with many different walks of life as well as dig deep to find the meaning behind the service of the story.

Let us talk achievements, the premise of this article.

Late last year Ané was nominated for the Woman in Media Award hosted by I am a Woman, I have a Purpose in Gauteng.

Up against other very accomplished women, a win would suggest a highly sought after woman in media.

August, Women’s Month, could not have been a more perfect time to announce the winner. And naturally, the winner had to be someone who grew up with an editor, graphic designer and communication specialists, who has seen the world, who is currently a journalist for hard news and is genuinely concerned for good command of vocabulary.

I cannot imagine anyone else winning this award than Ané.

Knowing her not only professionally, but personally provides me with the insight into “Ané’s World,” and let me tell you, this formidable blonde is slowly taking over the world.

READ ALSO: I Am a Woman, I Have a Purpose 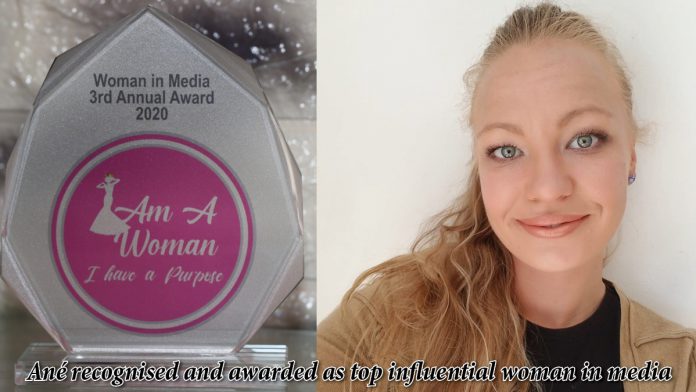