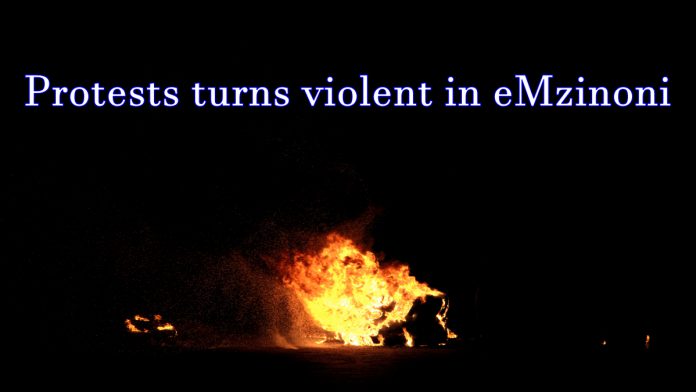 The protest actions against the current electricity situation in Govan Mbeki Municipality are expanding to other areas within the municipality.

The Bulletin received reports of protest actions in eMzinoni, eMbalenhle and Afghanistan (Kinross) over the past few days.

The situation in eMzinoni turn violent on 18 June when a truck carrying oranges were looted and eventually set alight. The truck was completely destroyed in the fire.

Friday night was a particularly dark night for eMzinoni, Bethal. The Bulletin received reports that both the Standerton road and the Morgenson road from Bethal were closed to traffic. We visited the area and were met with fires on both roads.

A coal truck was burning at the 9th street intersection on the Standerton road. A large crowd was gathered at the burning truck shouting and whistling.

On the Morgenson road, it was even worse. Coal was dumped in the road and a coal truck was on its side across the intersection. The truck was also burning. Protesters threw rocks at the Firefighters from GMM as they tried to extinguish the fires. It became very unsafe and everyone withdrew to a safer distance.

To reach the N17 we had to navigate farm roads between the Morgenson road and the N17.

A large group of residents and other role players were gathered as they assessed the situation. SAPS managed to disperse the crowd at that time. As we approached the burning truck the crowd started to return. A bakkie tried to leave eMzinoni but had to drive past the protestors. The bakkie suffered a lot of damage as stones were heard several meters away. The bakkie managed to speed away. It is unclear whether the driver suffered any injuries.

The protesters, as well as the police, braved very cold conditions as temperatures plummeted to 0 degrees. The whole area was covered in darkness as technical staff struggled to restore electricity to some areas of eMzinoni. Loud cheers could be heard as the high-mast lights were switched on. It took several minutes for the power to be restored. Unfortunately, it was only restored in certain sections.

Several members of Bethal CPF and the community assisted in warning other road users of the protests. They managed to divert the traffic to other roads. Thank you for their efforts.

It is important to adhere to their instructions. These organisations play a vital role in ensuring innocent bystanders’ safety. A member of the public decided not to adhere to the instructions and braved the road only to have to abandon his vehicle and watch from a distance as his bakkie was engulfed in flames.

Three vehicles in total were destroyed last night in eMzinoni.

The roads to Standerton and Morgenson are still not safe to use and travellers should make use of alternative routes.

The situation in eMbalenhle also worsened last night. Several blockades and fires were observed along the R546 next to eMbalenhle. There were also reports of fires from burning tyres inside the town. There was a heavy police presence in the area. Power was restored to the area around 09H30 and the situation quieted down.

We could unfortunately not bring you footage of eMbalenhle’s actions last night but reported about Thursday night.

In 2018 promises were made by the Premier of Mpumalanga, Zweli Mkhize, at the time that electricity supply will be returned to Eskom. This promise proved to be nothing but an empty promise as the electricity supply is still with GMM and Eskom refuses to consider the proposal because of the extraordinary high debt of GMM.

The Eskom debt at the time was R542 million. It is now a staggering R1,9 Billion. This brings to questions of how the debt could escalate so much in just two years. It escalated with R1,4 billion in just two years. The Eskom debt stood at approximately R80 million it 2011. In the next 7 years, it grew to R542 million only to see the exceptional negative curve over the next two years to bring the amount to R1,9 billion.

This growing debt is the main reason for the load shedding in Bethal, eMzinoni and eMbalenhle.

It would appear that the current administrations have lost total control over the situation.

The protests started a while ago and were fairly peaceful. On June 28, a whole street was turned into what resembled a war zone, a huge fire pit with tyres burning at every intersection.

The Bulletin reported about protests against electricity cuts on several occasions in the past. The problems just keep recurring.