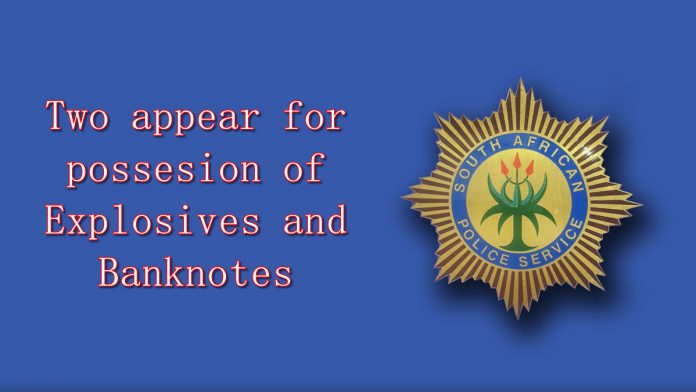 The Provincial Commissioner of South African Police in Mpumalanga, Lieutenant General Mondli Zuma, has lauded police for the arrest and ordered them to thoroughly investigate these cases. "We believe that the arrest of the two men is a great achievement and that more arrests are imminent," said General Zuma.

Two suspects have appeared before the Middelburg Magistrate’s Court today, for crime related to ATM bombing and other robbery aggravated incidents. The suspects aged between 44 and 59, were sniffed out at their hideouts at Mhluzi near Middelburg yesterday 28 July 2020 and were found in possession of explosives as well as stained money. Their arrest came after two ATM’s were blasted in Badplaas on Monday. This week alone, different heavily armed groups robbed filling stations at Badplaas, Mmametlhake and Kabokweni respectively.

The arrested suspects, 59-year-old Teli Elson Molotha and 44-year-old Sandile Victor Ngcobo, who is attached to the South African National Defense Force (SANDF) stationed at Middelburg, were allegedly part of a group of six heavily armed men who stormed into a filling station in Badplaas, held a security guard at gunpoint and threatened to set him alight, detonated two ATM’s then fled the scene with an undisclosed amount of cash.

Police then launched an Intelligence-Driven Operation which led them to Mhluzi where the suspects were nabbed. The court has remanded them in custody pending a bail application next week Wednesday, 05 August 2020. Molotha and Ngcobo are also expected to appear at the Carolina Magistrate’s Court for the bombing of the ATM’s in Badplaas. In the meantime, the police have launched a manhunt for the outstanding suspects and therefore request the community to contact Detective Warrant Officer Nkosinathi Ndaba at 0823189530, for any information.

This Badplaas incident follows the ones of Kabokweni and Mametlhake which occurred on Monday, 27 July 2020, where armed suspects also attacked filling stations.

ALSO READ: Police arrest 1 prosecutor for corruption and defeating the ends of justice

In Kabokweni, a group of about fifteen suspects emerged on foot firing shots randomly with high calibre weapons. They blasted safes in the shop, took an undisclosed amount of cash then fled the scene on foot and no arrest has been made as yet. Anyone with information that may assist police in their investigation, on this issue, is requested to contact Detective Captain Shaka Nkosi at 0712001669.

Meanwhile the Mametlhake robbery, was committed by more than three armed suspects who also blasted two ATM’s and took an undisclosed amount of cash then fled the scene. A security guard who is responsible to guard the place, sustained injuries in the process which led police to opening an additional case of attempted murder. No one has been arrested and the community can participate in the investigation by calling Detective Captain Solomon Moshime at 0820651355.

The Provincial Commissioner of South African Police in Mpumalanga, Lieutenant General Mondli Zuma, has lauded police for the arrest and ordered them to thoroughly investigate these cases. “We believe that the arrest of the two men is a great achievement and that more arrests are imminent,” said General Zuma.

SAPS is turning to technology to turn the tide against crime

During the launch of the Safer Festive Season Operations on Friday, 25 October 2019, at Umlazi, South of Durban in KwaZulu Natal, the SAPS, together with mobile service provider, Vodacom have launched a SAPS App called MySAPS mobile applications.

A first of its kind on the continent, the MySaps mobile App was designed to provide South Africans with a new and easy way to access policing services and information.

The new app will allow citizens to interact with law enforcement officials more effectively by:

• Providing tip-offs anonymously through the app