Redemptive Coffee – For the love of coffee!
R

“Coffee grown worldwide can trace its heritage back centuries to the ancient coffee forests on the Ethiopian plateau. There, legend says the goat herder Kaldi first discovered the potential of these beloved beans.

The story goes that that Kaldi discovered coffee after he noticed that after eating the berries from a certain tree, his goats became so energetic that they did not want to sleep at night.

Kaldi reported his findings to the abbot of the local monastery, who made a drink with the berries and found that it kept him alert through the long hours of evening prayer.

The abbot shared his discovery with the other monks at the monastery and knowledge of the energising berries began to spread.

As word moved east and coffee reached the Arabian Peninsula, it began a journey which would bring these beans across the globe.”

Coffee is the first thing most people think of when they wake up in the morning. The aroma, the bold flavours and how that first sip makes you feel all warm and fuzzy inside.

Roasting coffee beans is an artform perfected by few and practiced by many.

It is the art of sorting, roasting, cooling and packaging or grinding different beans until the perfect mixture has been achieved.

To roast these beans, the roaster uses the endothermic (absorbing heat) process until the correct temperature is reached and the process turns into an exothermic (giving off heat) process.

After this has been completed, the roaster will then ensure the beans are air cooled.

But there are many traditional variations in bean roasting across the world.

Maree Verhoef decided during the lockdown that he is going to start roasting coffee beans. Coffee is not just coffee to him; coffee is a way of life.

The idea came to him during lockdown but his research and experimenting started long before. Originally, he thought he would start this small business one day when he retires.

“This is a passion of mine. I started this because I like to drink proper coffee,” Maree said.

“We are Redemptive Coffee meaning that we save people from bad coffee. I also refer to a Redemptive Agent which in my case is Jesus. But the story behind all of this is that the coffee saves you.”

At the moment Maree is still roasting the coffee beans from home. He uses the freshest beans that he can find from his suppliers.

“Fresh beans mean that the beans you buy must be used within two weeks. If you wait longer than two months the beans are old.”

He is currently experimenting with coffee beans from Ethiopia, Guatemala, Nicaragua, Burundi and Costa Rica.

“I bought a sample roaster to roast the coffee beans with. The roaster uses gas. The beans will go into a drum and the drum turns. The airflow and heat cause the bean to go through various stages. The flavour you achieve at the end of the process is depending on how long you roast the beans in the certain stages.”

The Redemptive Coffee mobile truck is there to help people move fast through life but also to remind them to stop and smell the coffee and to remember that there is ALWAYS time for a coffee!

Maree’s passion and love for coffee was the reason he finished his barista course. As he talked about coffee, one could hear the excitement in his voice.

Redemptive Coffee is definitely a light in a time of darkness for the people of Secunda and hopefully soon Secunda will have its very own roastery! 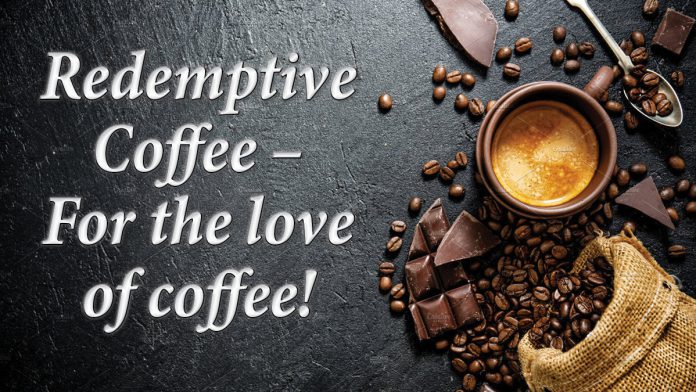