GMM Mayor misleads council to obtain condemnation for actions already taken while this will cost the municipality thousands.

During this judgement, the ANC led Council were dealt another blow by the courts as they try and rid themselves of the Municipal Manager Filani Mndebele.

The council convened on the 30th of March and the item was presented to the council. In this item, the Mayor, Cllr Nhlakanipho G Zuma, explained the court action that the Municipal Manager took to try and have him reinstated at the council.

He proposed that council take the following resolutions.

1. That the High Court (Mpumalanga Division, Middelburg) judgement on the matter between the Govan Mbeki Municipality and the Municipal Manager, Mr SF Mndebele, attached as ANNEXURE ‘C’ to the report, BE ACKNOWLEDGED.

2. That arising from the judgement referred to under point one, Council CONSIDERS the following options:

2.1. That an appeal be lodged against the High Court ruling. OR

2.2. That the provisions of the High Court be complied with.

This is an important fact on the timeline. The opposition parties vehemently opposed the possibility of an appeal. Unfortunately, the ANC majority decided to go ahead with this appeal.

The problem lies in the fact that the appeal had already been lodged at the high court on the 29th of March, without council approval.

Read more on the Municipality HERE

Judge Brauckmann said in his judgement:

THE RESOLUTION BY THE APPLICANT’S COUNCIL DATED 30 MARCH 2021

[24] Even if I am wrong on the above, Counsel for first respondent referred to a resolution by the applicant’s council that dealt with this application.

Applicant served and filed its application for leave to appeal on 29 March 2021. At no stage did it become apparent that the application was not authorised by the first applicant’s council but when the court’s attention was drawn to the fact at the hearing of the application for leave to appeal on 14 May 2021. The resolution was duly served and filed by the first respondent’s attorneys but did not find its way onto the court’s file. It seems that the applicant’s counsel also did not have it at hand.

[25] The resolution “ACKNOWLEDGED” the judgment and resolved further “That arising from the judgment………….,an appeal BE LODGED against the High Court ruling”.

[26] It is firstly not clear which “ruling” an appeal should be lodged against. Rulings or findings are not appealable but orders are. Secondly, and accepting that it was meant to read that the judgment/order were to be appealed against, it is common cause that first respondent already, without authority to do so, served and filed an application for leave to appeal a day before the resolution was taken. The resolution does not ratify the unauthorised application of 29 March 2021. The application for leave to appeal was therefore served and filed without proper authorisation by the council.

The Bulletin spoke to Cllr Ciska Jordaan of the Democratic Alliance regarding the court ruling.

She said the following in a statement to The Bulletin:

The Democratic Alliance is appalled by the manner in which the Govan Mbeki Council is pulled into the ANC executive’s continuous, obvious and failing witch-hunt against the Municipal Manager, Mr Felani Mndebele, which is now going to cost the municipality thousands and result in even more depleted finances and ultimately poorer service delivery for the people.

Also read: BODY OF WOMAN FOUND DEAD IN THE FIELD

This unlawful action only confirms that decisions are being made by a select few behind closed doors and that the battle against the municipal manager is not a battle of the council but of the ANC who would attempt to bulldoze anyone in their way at the cost of the municipality with or without the approval of the council. Even the judge of the High Court was able to see the true intention of the appeal and indicated that the municipality was “having a second bite at the cherry”.

The DA maintains that this council should be dissolved just as the Lekwa council had recently been dissolved. It is totally unacceptable that the people of Govan Mbeki should suffer at the hands of those who would abuse their power in such a way and are clearly incompetent and undeserving of the leadership of this municipality. Residents of Govan Mbeki will have a chance to remove the ANC from power on the 27th of October this year. We urge all and sundry to go out and register to vote for real hope and real change now.

The Judge ended his ruling with the following paragraph:

[26] Therefore and for all the above reasons the leave to appeal is refused and the application is dismissed with costs.

The municipality is facing tremendous financial challenges at the moment only to have money squandered on court proceedings that had no guarantee of success but rather every indication that it would not succeed.

Who will now pay these legal fees? Will it be GMM and ultimately the residents of GMM or should this be paid by those that lodged the appeal without an authorisation? Maybe even those that voted to hide this illegal action by the Mayor?

This action to rid the municipality of the Municipal Manager Filani Mndebele waisted a lot of money. Money that could have been used to repair potholes, water leaks and even solve some electrical problems.

This municipal council continues to take very poor decisions under the current ANC majority. Only time will tell how long this will continue, how long the residents will allow this to continue.

The MM may be back at work but GMM still has an acting municipal manager. Stability might return to the municipality once this matter has been resolved. The turnaround in Acting Municipal Managers has only damaged and weakened the current administration. 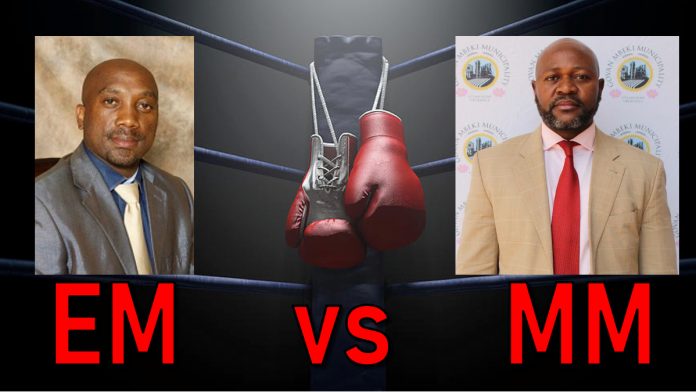 Earlier this week The Bulletin reported on the resignation...
CityPress

A very dreadful incident took place in one of...