Mashilo addressed a small gathering at the taxi rank and brief the residents on the developments regarding land allocation for stands to build houses on.

MEC Mashilo told the group that they had to look at the availability of land and Anglo Ashanti donated about 170 hectares for the project. Other sections of land would also be purchased soon.

A service provider has already been appointed by the office of the MEC and would start with the township establishment very soon. It is expected that the first contractors will be on-site on Tuesday.

He eluded that such establishments take time. It would take approximately 18 months but MEC Mashilo said that it should be finalised in eight months.

The funds for the development would be made available from the Department of Human Settlement as GMM would not be able to carry such a financial burden at this time.

They are contemplating providing all the infrastructure needed in the area.

The executive Mayor of GMM, Cllr Zuma said that the intervention by the MEC is “very desired and could not come at a better time.”

The MEC promised to keep monitoring this project with his whole team.

The Mayor said that they expected to make more than 10000 stands available with this project.

During the MEC’s address at the taxi rank, the feelings were mixed but those that the Bulletin spoke to said that they will wait and see if anything would happen.

The community threatened with protest action in the days before the MEC came to Leandra but have since quieted down in anticipation of the start of the project.

Here is the message that did the rounds on social media:

The community were made to believe that the MEC and entourage would come back to Leslie for a feedback as promised regarding a way forward on the above issues. Mshengu alleges that the community was not given feedback and when they tried to communicate with the offices of the mayor in GMM and also that of the MEC they are told that they would be given feedback SOON, which they believe the officials are trying to avoid them. The community at Leslie have now decided to it 7days after which if addressed accordingly with feedback they will resume Protest Actions. The possible date to resume protest actions is Thursday 2021-08-05

Advertisements
Previous articleANIMALS 101 – HAVING AN EMERGENCY PLAN FOR YOUR PETS.
Next articleSolidariteit announces that Sasol will carry costs for tests 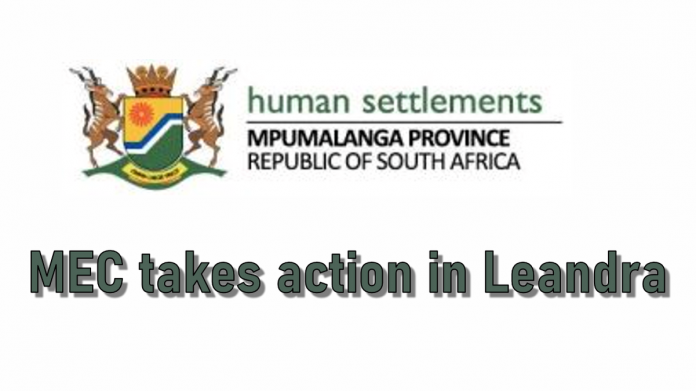