On Friday a symbolic 2,4km walk took place at Lake Umuzi. On Sunday, a church service was held at the Bikers church that included the SADFA members and a small ceremony at the Makumbura shell hole. The service was led by Pastor Jackie van Dyk.

The 2,4 took place early in the morning with veterans walking to the south bank where hand grenades (small cooldrink bottles) were thrown at a target and sharpshooting were done with ketties.

The group then walked back to Bosveld Lapa for a great breakfast. Every participant received a medal and a certificate.

The church service and small ceremony on Sunday were to remember those that lost their lives in the line of duty.

The names of all the servicemen and women from the Govan Mbeki area were read. A symbolic protea was also placed at the Moths shell hole in remembrance of those that have fallen in conflict after the second world war.

Gerhard Claassen, Old Bill of the Moths, spoke about the Battle of the Lomba that took place in Angola on October 3, 1987.

Here is the full account of that day and the leading events:

According to history books, the SADF lost the fight for Quito Cuanavale, but Quito was not the goal.

In 1987, 61 Battalion were stationed at Omuthia basis.

In July a company large group of soldiers from infantry school arrived at Omuthia and established themselves in a temporary base near the basis.

A few days later, the entire battalion was taken to act on the paradise ground. This was a sign that something was going on, and it was confirmed when Commandant Smit announced: “it has become clear to the South African government that Fapla is preparing a major offensive…”

What he didn’t tell everyone was that Fapla has already done much more. 4 brigades and 2 tactical groups were already on the march to Jamba, Unita’s headquarters in South Angola. Another 6 brigades were prepared in the final stages of war and prepared to move south and 2 more brigades were held in readiness.

In manpower terms, the force dispatched on route to Unita totalled at least 25000 soldiers of mixed ability with the elite and most heavily equipped forces at the vanguard.

Commander Smit continued “the battalion will immediately prepare for full combat readiness. We move out at 02h00 tomorrow, travelling to the border crossing near Rundu to await further orders.”

At 02h00, the first of 150 fully charged vehicles, staffed with about 400 young men, started the exit from Omuthia.

Battle preparations ended on 24 august and 4 days later on 1 September 1987 at about 04h00 they cross the border over in Angola.

Fapla has already sent 12 well-equipped brigades from Luanda to Quito Cuanavale, which is 120km north of the Lomba river and the river is 300 km north of the SWA (Namibia) border.

Russian generals and specialists devised an operation, involving 2 waves of attack, each of four brigades and the vanguard consisting of 2 tactical groups which include a battalion of tanks and 4 hardened mechanized brigades. A total of about 10000 men was tasked to create a buffer zone at the strategic Lomba river.

61 Mech Batt’s orders were: “it is imperative that they are not allowed to cross the Lomba. Make the best speed to the Lomba river, engage and stop the enemy there… ”

The enemy had a great advance over 61 Mech Batt. The 16th, 21st, 59th and 47th Brigades had been moving for more than a month and were near the Lomba. Their 66th brigade was also in the background with another 2,000 soldiers while 61 mech batt was another 300 km from the river.

A brigade is equal to 3 battalions.

Fapla’s first group of 4 hardened brigades was more than 5 times the size of all the SADF troops on the border, before one more the MBT’s (main battle tank) at tel.

On September 9, 61’s Bravo Group launched the first full-scale attack in Ops Modular on the enemy which still moved south and overrun some of Unita’s logistical bases. This was just south of the Lomba river where they dug themselves in.

On September 11, Bravo and Charlie again tried to disperse Fapla’s 21st brigade where they were entrenched. Bravo also ran into a squadron T-55`s.

The prototype Ratel-ZT3 attacked the first T-55 in Ops Modular and destroyed 3 MBT`s on the end.

The Ratel-90`s struggled and only destroyed 2 MBT`s at the cost of one Ratel and its crew, all from of 32 Battalion.

For the rest of September, there was no rest, constantly moving, attacking, moving and seeking hostile entrenchments. Attack and withdrawal, again and again.

Fapla has meanwhile had more than 10,000 soldiers of different nationalities in place.

A short time later the order came through: “All vehicles start.”

Just after sunrise 61 mech batt reached the point where they left the logistical vehicles and continued forward in battle formation.

An unbroken barrage of high explosive and anti-personnel ordinance erupted 100 to 400 meters in front of Charlie Squadron`s ratels. Mortars, in concert with their long-range artillery and MRL counterparts, released 9 well-coordinated ripples of shock and awe onto enemy positions, lasting a good 3 to 4 minutes.

Then Captain Cloete`s command: “Charlie Squadron, move out in formation, may God be with you all.”

Now, after 20 months of training, preparation, small attacks and contacts, the final piece of the puzzle is falling in place.

It was Fapla, backed by Cuba and Russia against 61 Mech Battalion of the SADF. Goliath against David.

Now finally, the stage was set for the battle on the Lomba.

During the first half-hour of the war, the live-fire didn’t become less from the front, just more and more. Fapla targeted the front line as well as the support groups.

October 3 looked like a Russian weapon dealer’s catalogue, everything, from BRDM`s, MRL`s (multiple rocket launcher), Stalin Organ, SA-9 as well as three SAM-8 high tech systems, something that America wanted to get their hands on.

A T-55 MBT target 31 Charlie who is trying to stay everything from his fire line, the MBT fire, misses. The ratel’s crew moved to the attack and 4 shots later the MBT was a burning wreck, the first of 18 hostile MBT`s for the day.

The arrival of Russian MBT`s in theatre heralded a new, even deadlier phase as the 47th Brigade began moving their biggest badest boys up the frontline. These were supported by yet more, lightly armoured, BTR`s, BRDM`s, and platoons of infantry.

Whatever happened, the Ratels had to stop, aim, and fire and be moving again within 45 seconds to prevent becoming a static target which could definitely be an attraction of hostile fire.

Some of them shot, and recharge and shot again within 8 seconds. Across the line, the guys were encountering heavy, mechanised, resistance – a squadron of medium skinned 90mm Ratels was taking on Russian MBT`s, and heavy armour and they were still doing ok.

Move forward, fire, reverse 20 to 30 meters, constantly engaging in manoeuvres to miss incoming fire. That’s how it was for Charlie squadron. it was about 3 hours of continual fire in motion, it as a well-oiled machine on the chassis of 61 mech battalion group.

The manoeuvre was high risk, the angle of approach exposed their right flank, but whatever, there was no time to waste, three brothers’ lives were at stake.

3 times Charlie squadron withdrew to reload and cool down weapons, and then rushed back into battle and continued fighting as if they were there all the time. A Ratel 90 carries 71 bombs, 29 in the turret and 47 in bomb racks in the vehicle and it was not designed to fight MBT`s.

But Charlie squadron was giving Fapla more than just a bloody nose.

32 Alpha received a hit from an 81mm mortar, luckily it hit the back inside the spare wheel with no serious damage to the Ratel or crew.

And then it happened, over the dense fog of war, the call came over the squad net – “Charlie 33 has taken a direct hit…”

Commandant Smith immediately ordered that a fire plan or fire belt be thrown in front of Charlie 33. Every rifle, Canon and artillery available fired everything they could.

Graham Greene ran and fetched Adrian Hind, who was shot from the Ratel and was fatally wounded, while the driver and gunner were picked up by a Buffel (armoured vehicle).

The fire plan was the last straw and Fapla fled. Some of them tried to swim across the river, others tried to ride the t-55`s through the river to try to form a bridge, others just dropped their weapons.

Fapla`s 47th brigade was wiped off the face of the earth.

Adrian Hind, Charlie 33 Ratel`s Commander, was the SADF`s only casualty on that day.

History books say that there were about 6000 South African soldiers on the front line and that Unita did most of the hard work, but in reality there were only 36 South African teenage boys on the battlefront that day, October 3, 1987.

The South African Defence Force Association states that: Military veterans should be acknowledged for their contribution to the development of the RSA – men and women that made sacrifices and served their country with honour and dignity. People that had served their Country unselfishly and deserves to be recognized, remembered and be taken care of. The South African Defence Force Association (SADFA) was established in February 2009 with the sole purpose to ensure this.

SADFA is the veteran organisation that will give you as a veteran the optimal opportunities to belong somewhere, to participate in Memorial Services, to be looked after and will ensure that your voice will be heard on the highest levels. SADFA creates a support structure to assist you as a member on different levels and to strengthen communities. We focus 20% on the past (Memorial Services and events where experiences of the past are recalled) and 80% on the future by creating projects to offer our members a better future.

The areas they focus on are as follows: 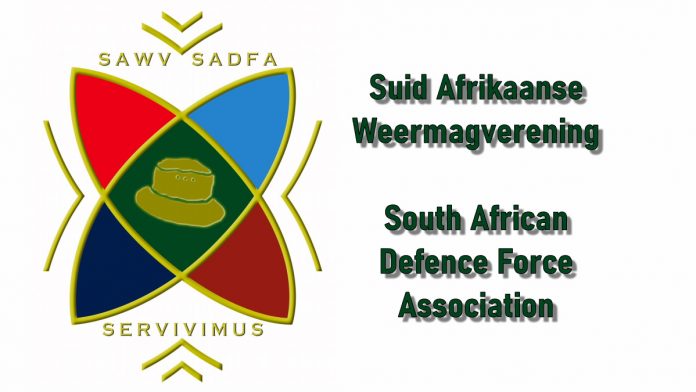