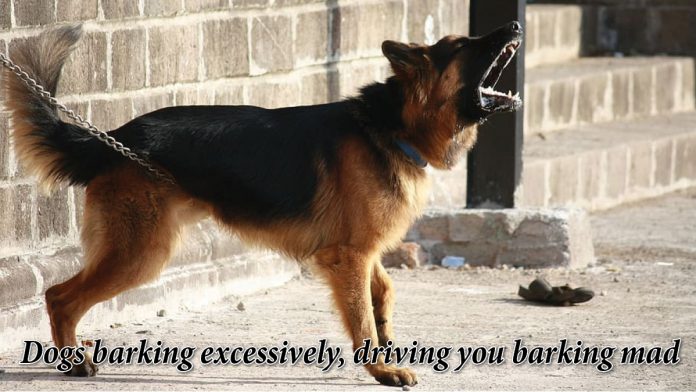 Recently, there have been many complaints from the community about a neighbour’s dog or the neighbourhood’s dogs that are barking excessively. Once one dog starts to bark the others follow… Dogs are pack animals after all.

Under South African law, owners may not keep any dog that barks for more than six minutes in any hour or more than three minutes in any half hour. An official may order the owner to take necessary steps to stop the disturbance and owners are required to keep the dog under proper control.

Unfortunately, there are those people who have jumped on the bandwagon and have taken their neighbours to court because of a dog barking excessively and making it unpleasant for those whose dogs are barking.

Excessive barking is a form of environmental noise pollution that has been proved to impair wellbeing (can impair hearing, mental health and task performance).

If a neighbour has complained to authorities about a neighbour’s dog driving them barking mad, the owner of the dog can receive a written warning if they did not investigate the incessant barking.

If the dog owner fails to comply with the written notice after the barking was declared a nuisance, the owner can be fined up to R 20 000 or two years’ imprisonment or both.

There are many reasons why dogs bark; lack of exercise, lack of stimulation, separation anxiety, protecting territory, or something else that can be addressed.

It also depends on the breed of the dog as some breeds are bigger barkers than others.

Barking, howling, growling, whimpering and whining are normal things that dogs do in order to get their message across.

The most common reason dogs bark at night is to send a warning to anything and anyone that is approaching their territory.

In a dog’s earflaps, there are more than 18 muscles that control it. This allows the dog to lift, tilt and rotate each ear individually. This helps the dog to locate where the sound they are hearing is coming from.

A dog’s sensitive hearing can also be a reason why it is barking excessively. As owner you should know your dog’s barks and pay attention, especially at night, to what your dog is trying to communicate to you.

By listening you might realise your dog is warning you of danger approaching or it just wants to be let in because it is cold outside.

If your dog is warning you of danger, investigate. You do not have to leave your house but you can look through windows to ensure that there is nothing out there.

READ ALSO: How to Handle a Barking Dog

If you are too afraid or if you are alone phone the police, security company or your neighbourhood watch and ask if they can drive past your house.

If there is danger phone the police immediately.

If you are living next door to a dog that barks excessively, be nosy and investigate before writing a complaint, suing a dog owner or phoning the police.

You never know when you might be the hero and save a life!