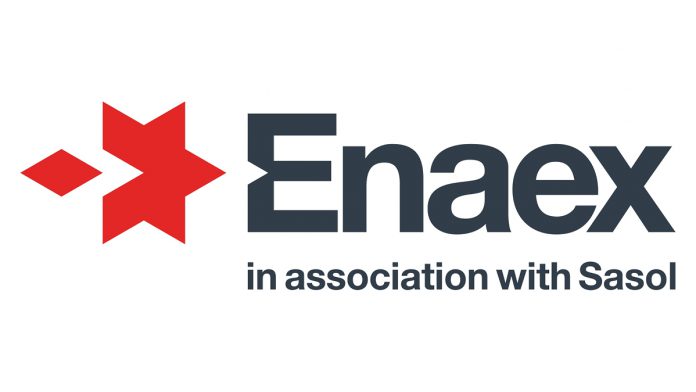 Integrated chemicals and energy company Sasol and Enaex, a subsidiary of the Sigdo Koppers Group, have announced the start of operations in Southern Africa. The new explosives joint venture Enaex Africa started operating on 1 July 2020.

Integrated chemicals and energy company Sasol and Enaex, a subsidiary of the Sigdo Koppers Group, have announced the start of operations in Southern Africa. The new explosives joint venture Enaex Africa started operating on 1 July 2020.

In 2017, Sasol commenced with a detailed asset review to ensure all assets in the company’s global portfolio deliver against stringent financial metrics and where aligned with the company’s growth strategy.

In line with this review, Sasol’s explosives business was identified as having substantial growth potential that could be unlocked through collaboration opportunities, including the possibility of partnering with a world-class explosives brand.

In June 2019, after a robust evaluation process, Enaex S.A. was selected as Sasol’s preferred strategic partner to create a world-class explosives business on the African continent.

The new company will operate under the name of Enaex Africa. Enaex will be the majority shareholder and will take over management and operational control of the entity from 1 July 2020.

Enaex in association with Sasol will comprise certain assets and associated activities spun off from the current explosives and rock fragmentation value chain of the base chemicals business of Sasol South Africa.

This JV includes the associated business activities in both South Africa and other countries in Southern Africa.

“We are delighted to announce that on 1 July 2020, Enaex Africa in association with Sasol, will officially start operating in South Africa and on the African Continent. Enaex is a Chilean company celebrating 100 years of history and leadership in the explosives business in South America and together with Sasol will be a force to be reckoned in the Mining Industry,” said Sasol President and CEO Fleetwood Grobler.

Founded in 1920 in Chile, Enaex brings to the Southern Africa industry a century’s experience in the global explosives market with their core business being Ammonium Nitrate production – Enaex is the third-largest industrial grade ammonium nitrate producer in the world – explosives production and blasting services.

Enaex is also one of the few explosives companies in the world that can produce and offer the entire spectrum of products and solutions to execute the blasting process.

The company has subsidiaries in eleven countries, including Argentina, Peru, Brazil, Colombia, France, the US, Mexico and Australia and exports to more than 40 countries all over the world.

Enaex, provides blasting services to some of the major mining companies in the world, such as Anglo American, BHP, Codelco, KGHM, Glencore, Vale, Yamana Gold and Teck Resources.

This deal is part of the strategic plan of Enaex to continue strengthening its international presence in the most important mining regions of the world.

Francisco Baudrand, CEO of Enaex Africa noted: “This is truly an incredible day for Enaex with a new venture on a new continent. This Joint Venture is a platform of growth for Enaex not only in Southern Africa, but also for us to become the leaders in explosives and blasting services for the Mining Industry on the African continent.”

Meaningful participation for BBBEE has also been catered for in the shareholding structure in line with South Africa’s transformation agenda, which is fully supported by both Sasol and Enaex.