Emergency services are battling to contain a fire that broke out at Parliament in Cape Town on Sunday morning.

“Various crews from different fire stations were on the scene trying to contain the blaze,” said Jermaine Carelse Spokesperson for the City of Cape Town’s Fire and Rescue Service, “We were notified of the fire just after 05H00 this morning (Sunday).”

“Initial reports indicated that the fire started on the third floor and spread to the office space and gymnasium,” said JP Smith, City of Cape Town mayoral committee member for safety and security.

There was no indication of what may have started the fire.

Patricia de Lille, Minister of Public Works said about 35 minutes ago that the fire is mostly under control and that Old Assembly is where the building was burning.

There are about 36 firefighters on the scene that were struggling to bring the fire under control. There are fears that the fire will spread even further as that area has a lot of wood and carpets.

Also read: Woman appeared in court on charges of murder

Read some of the mainstream national articles here:

Firefighters are still battling to contain the fire

Several videos and tweets are doing the rounds on social media 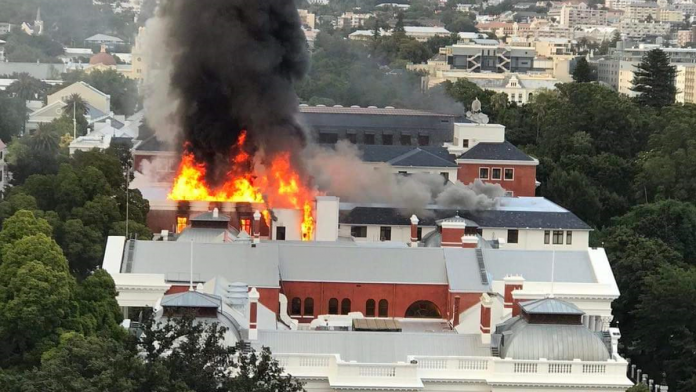