CrimeHijacking levels on the rise.
Crime

Hijacking levels on the rise.
H

Govan Mbeki Municipality residents have reported several attempts as well as actual cases of hijacking in the municipal area.

Jaco Horn, from GTR and Secunda 911 assist 24/7, issued a warning once again on his Zello channel, urging people to be vigilant when arriving or leaving their homes. This was after the latest attempt this morning in the residential area.

Here is the police report

The victim was on her way to work with her vehicle silver/grey VW Polo (REG: NN 93357).

Just outside of her driveway in the street she saw an unknown man coming towards her. She was trying to avoid him as he was in the road.

The man came to the driver’s side of the vehicle and tried to open the door, but it was locked.

He took out a silver handgun and pointed it in her direction demanding her to get out of the vehicle, he spoke in Zulu to her.

She did not get out and he shot at the driver’s door of the vehicle. She sped away and the suspect ran away in the opposite direction.

No injuries were reported.

The damage to the vehicle is on the right front door just underneath the window. The window shattered when the shot was fired.

All the role players were on the scene as well as Col Mbokane and Col Mashili.

Did not wear a mask. Sasol two piece PPE (pants and jacket).

One should also be extra cautious when approaching intersections and stops signs.

Residents can make use of the following zello channels for urgent assistance if needed namely Secunda 911, Secunda 911 assist 24/7 and Langamed.

Zello is a Push To Talk App that is downloadable from Playstore.

Tracker, the car tracking company, reported on their website that hijackings levels are on the rise.

Tracker’s vehicle crime statistics for the year July 2019 to June 2020 indicate that hijacking is on the rise and remained prevalent during the lockdown period even with a significant drop in vehicle crime. Hijacking can also happen at any time of the day, any day of the week, and Tracker calls on the public to remain vigilant at all times.

Recorded from Tracker’s more than 1.1 million installed vehicle base, the statistics reveal that before the unprecedented event of lockdown, the number of vehicle crime activities rose nationally by 11% year-on-year, driven mainly by hijacking with an increase of 21%. Theft of vehicles, meanwhile, remained at a similar level to the previous year.

However, even with this drastic decrease in vehicle crime, hijacking was more prevalent than theft during lockdown. Hijacking attributed a higher percentage of the Tracker vehicle crime activities during lockdown when compared to theft, averaging a 56/44 split. This is an increase on the 50/50 split between hijacking and theft for the months before lockdown. It is a further increase on the previous year, which saw a 45/55 split in favour of theft. In addition, despite level 3 lockdown June 2020 hijacking numbers reached the same level as June 2019.

The latest data also indicates that there has been a shift in the trend regarding day of week and time of day when hijacking is reported. Hijacking is now prevalent throughout the week, from Tuesday to Saturday with only slightly less activity on Sundays and Mondays. Hijackings are also reported to Tracker throughout the day from 11am to midnight. Meanwhile theft is mainly reported around the weekend and during lunchtime hours.

Hostage taking is still a daily occurrence and remains a huge concern. Further crime trends noted by Tracker include a noticeable increase in vehicles being targeted for their loads, particularly food items and fast-moving consumable goods. Clients are also being robbed of their valuables and in some instance’s large amounts of cash.

The provinces and towns most affected by vehicle crime remain similar to past indices. Gauteng still experiences the most vehicle crime, with hijackings prevalent in Johannesburg. This is followed by KwaZulu-Natal with Durban in the top spot, and the Western Cape with hijackings mainly occurring in Mitchells Plain. Further hijacking hotspots include eMalahleni in Mpumalanga, Ibhayi in the Eastern Cape, Rustenburg in the North West, Burgersfort in Limpopo, Bloemfontein in the Free State and Dikhing in the Northern Cape.

Tracker’s efforts to combat vehicle crime resulted in 5447 vehicle recoveries, 819 arrests and 39 firearms recovered for the twelve months from July 2019 to June 2020.

“With the latest statistics indicating that hijacking can happen on any day of the week and at any time, it is clear that criminals are taking advantage of opportunistic situations and it is therefore imperative to always remain vigilant,” says Ron Knott-Craig, Executive: Operational Services at Tracker South Africa. “Make sure that your vehicle tracking device is in working order and make use of the features offered by your vehicle tracking service.”

ALSO READ: Forceful crimes on the rise in Secunda

Advertisements
Previous articleThe 1 and only Zebra Lounge is back!
Next article#2 is back and ready for NRC action! Secunda rally on 11 – 12 September 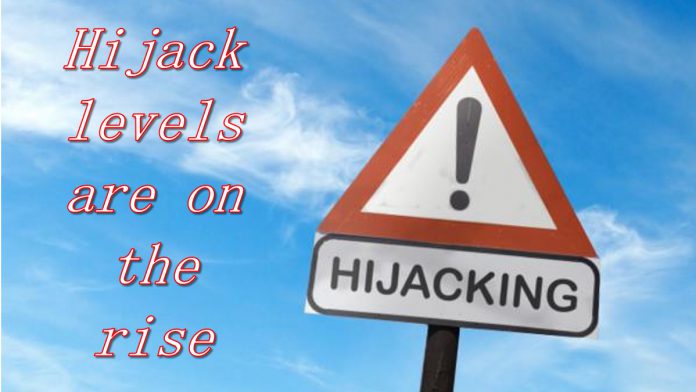 Hijacking levels on the rise.