In her judgement, Presiding Officer De Villiers said that Francois Pretorius did not convince the court that it would be in the interest of justice that he be released on bail.

Bethal Double murder suspect Francois Pretorius appeared in connection with the murder of Ds Hannes and his wife, Ibel Beukes in March 2020.

During his application, that was read by a Legal Aid attorney, Francois Pretorius stated that he takes full charge of his actions.

“I am riddled with guilt” stated Francois in his affidavit to the court. “I intend to plead guilty.”

Francois Pretorius also stated that his family is financially dependant on him and that he needs to continue his business to support them during this time. His business cannot operate without him.

Warrant Officer Nico Veldman opposed the application with an affidavit that was also read in court. He stated that Francois bludgeoned the two victims to death with a blunt object, placed them in the back of an Outlander and drove the vehicle to the dam where he left it.

Veldman also stated that Francois attempted to clean the murder scene and that it points to his attempt to defeat the ends of justice.

Veldman also pointed to the fact that a note was found that was written by Francois in which he admitted to the murder. Three rifles were also found at his home that was not licenced to Francois Pretorius. A pistol was also later found.

A nationwide search was launched to find Francois. A police helicopter was used after he was spotted on his Father in Law’s farm. He was not found.

Warrant Officer Veldman stated that Francois posed a flight risk as he faces a lengthy sentence if found guilty.

In his defence, Franscois’s Legal Aid argued that Francois had given his full cooperation from the beginning. He indicated that he would take responsibility for his actions.

She also said that he was confused and therefore disappeared for a short time. She also pointed out that the firearms found was not used in the crime

The state prosecutor argued that “it would be the court’s decision to grant bail or not”. She stated that the suspect fled after he was interviewed and that efforts were taken to cover his tracks. “He closed his shop and left his family,” she argued, “that shows his intent to flee.”

The state also said that his business is not part of essential services and Francois Pretorius would therefore not be able to continue with his business at this stage.

She also said that the demeanour of the suspect at the time showed his intention to flee.

The case was postponed until Wednesday 20 May for judgement in the bail application, depending on the outcome of the investigation into the questions posed.

Judge de Villiers said that personal circumstances and rights, as per the constitution, had to be weighed against the interest of justice as she postponed the trial until Wednesday 20 May.

The state called Warrant Officer Veldman to testify on Wednesday. Veldman was asked how the crime scene was established by the State Prosecutor (SP). He replied that info was obtained from a letter that Francois left to his wife.

Veldman visited the farmhouse (crime scene) on March 21 and found the scene cleaned and washed. They (investigating team) found a small spot of blood on the stoep and samples were taken. They also took photos of the scene. They revisited the scene on the evening of March 22. They sprayed a substance on the scene (Luminol) to indicate any blood. This only work in the dark. This makes blood visible. It was then established that the kitchen was the crime scene and it looked like the victims were sitting at the table.

On the farm, Veldman also found cleaning materials and clothes that were burned. In the rubble they found the remains of a Maglite, this is a heavy and strong torch. Veldman testified that according to the letter that Francois left to his wife, the murder weapon was indeed a Maglight. He then demonstrated how a Maglight could be used as a weapon. Veldman also testified that it corresponds with the post-mortem reports that stated the victims were struck with a blunt object.

The accused phoned his wife, Rene Pretorius, to ask her to purchase some cleaning materials as the kitchen were very filthy. In a statement by Rene, she confirmed that she met Francois at a shop where the cleaning materials were purchased and drove him back to the house. Veldman said that the whole family were later instructed to help with the cleaning and it continued until after 23H00 that night.

Warrant Officer Veldman continued to paint a bleak picture of the accused. He stated that Francois owed a lot of money. His shop rent was in arrears with R80000 and the shop had already been advertised by the landlord. There was nothing in the shop as the family took everything out and cleaned the shop.

He also indicated that R120000 were in arrears on rent for his dwelling as well as R20000 for electricity not paid. A businessman in Bethal also gave him jewellery to the value of R650000 that had not been returned.

In his testimony Veldman also said that Francois wrote in his letter, “Sorry for our dreams, I took the money, I took the gold. I am very sorry for what I have done.

Francois’s defence, in their cross-examination, asked if any legal action were instituted on these money claims. No legal actions were pending. She said then it should have no bearing on the case as the debtors showed no indication that they were pushing to recover the money.

Veldman continued by describing the countrywide search for Francois. “We searched for him from March 20 until March 26. On the 25th we received information that he was spotted on his Father in law’s farm near Belfast.”

A helicopter was also used in the search on the 25th but Francois was not found. “When he handed himself over, he said, I am tired, I cannot run anymore.” Stated Veldman.

According to the testimony of Warrant Officer Veldman, Francois poses a flight risk and there are indications that he would tamper with the evidence. The state witnesses are also afraid of him.

The defence said that he would have to continue his business to support his family although his wife, Rene, obtained employment. It was not clear how Rene’s family were supporting her and how long they would be able. She was only employed two or three weeks ago.

The cross-examination by both the State Prosecutor and the defence of Warren Officer Veldman continued for a while.

The state witness, WO Veldman continued his testimony that Francois poses a flight risk and that he would tamper with evidence and the Defence continued to contradict those statements.

The question on everybody’s minds was the one of Motive. Veldman stated that in the affidavit given by Francois after his arrest he only indicated that they had an argument over Jesus and that he lost his temper.

While the state was finalising her arguments the inevitable happened. Bethal’s notorious power cuts ended the proceedings prematurely and the case was postponed to Monday 25 May. 25 May also had electrical problems and the case once again postponed to June 1st.

Francois Pretorius, through his legal aid, contested and disputed some of the testimony of Warrant Officer Veldman. Pretorius said that he can run his business from home and Veldman disputed the claim to work from home as all the gold and jewellery has been returned and that the debt burden on Francois would prohibit any new or continuation of business by the accused.

Francois Pretorius also contested the fact that he is not a flight risk and that he handed himself over to the police.

Veldman vehemently disputed these claims and said that Pretorius only gave himself up due to the relentless pursuit of the police. “Francois said that he was tired,” said Veldman.

De Villers said that Francois Pretorius posed a threat to the state witnesses and that he would interfere with the witnesses. She also said that the previous actions of Francois should be taken into consideration when concluding his application. The interest of a person’s constitutional rights must be weighed against the interest of justice.

De Villiers concluded that Francois Pretorius’s previous actions indicate that he will indeed pose a flight risk. This is considering the extensive police search as well as the fact that when he disappeared, he did not contact his family and took money and valuables as per the letter left to his wife. “The applicant abandoned his business, residence and family when he fled. He had also disappeared on a previous occasion and did not return for three weeks,” Said De Villiers, “when he returned it was without explanation.”

Presiding Officer De Villiers concluded her judgement by saying that she weighed al the testimonies brought before the court and that the rights of Francois Pretorius did not outweigh the interest of justice and therefore he is denied bail and is remanded in custody.

The case was postponed for further investigation. 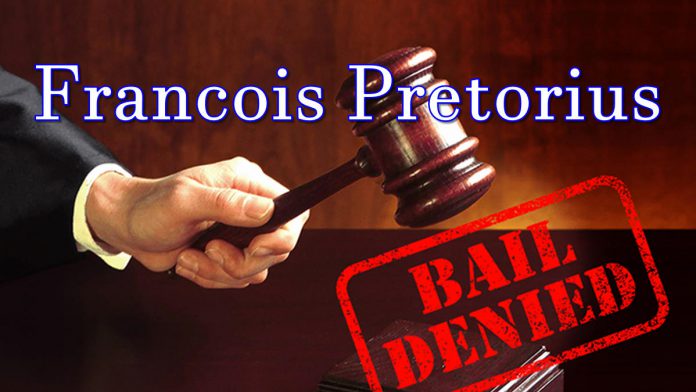