Roadblocks across the province help curb the spread of the Coronavirus.
R

The Bulletin visited a roadblock on the N17 on Saturday to see first-hand what happens at these roadblocks.

The Roadblock is normally a very busy one with thousands of vehicles passing every day. But during our visit, it was a totally different affair. Very few motor vehicles travelled on the road with mostly large trucks being on the road.

A number of police officers were on duty and signalled vehicles at random to stop at the roadblock.

Motorists were then requested to state their reasons for travelling as well as to show their paperwork. Travellers that want to travel from one province to another are promptly ordered to turn around and proceed to where they came from.

All of the vehicles that were stopped at the roadblock had the correct paperwork and could proceed with their journeys.

According to a statement released by the ministry on Thursday, April 9, 2020, the number of cars stopped and checked at roadblocks across the country increased from 17 559 on Monday to 29 738 on Wednesday.

Also that the number of e-hailing providers that failed to adhere to passenger limits for a vehicle licensed to carry 4 passengers increased from 32 on Monday and peaked on Wednesday at 509.

On Wednesday, the number of minibus-taxis that failed to adhere to the passenger limit increased from 18 on Monday to 509.

Motorists also attempted to cross provincial boundaries despite a ban on inter-provincial travel.

The number of motorists who tried to travel across provinces increased from 125 on Monday to 196 on Wednesday.

“This conduct demonstrates a worrying trend which must be roundly condemned by both government and civil society. Those who undermine efforts to arrest the spread of this pandemic must face the full might of the law and equally face condemnation by society, as their behaviour places the lives of millions at risk,” said the Minister.

Earlier in the week, Gauteng had the highest number of motorists attempting to cross provincial boundaries to other provinces at 108 but has since been overtaken by Mpumalanga at 149 on Wednesday, 8 April.

Despite this, Minister Mbalula encouraged the majority of citizens who continue to respect and comply with the lockdown regulations and directions to continue to do so and encourage others to follow suit.

The Minister further commended the sterling commitment of traffic law enforcement officers across the country in ensuring that South Africans stay home and further provide critical support to other law enforcement authorities.

The department through its entity, provincial departments responsible for road safety and municipalities deployed a total traffic officers across the country, to ensure compliance with the published Regulations and Directions.

Motivated by taxi associations, e-hailing providers and private motorists who continue to comply with the regulations and directives, the Minister urged industry bodies to play their part to reign in those who continue to demonstrate such flagrant disregard of the law.

“Law enforcement will be intensified and authorities will not hesitate to ensure that the full might of the law is brought to bear on those who continue to break it,” said the Minister. 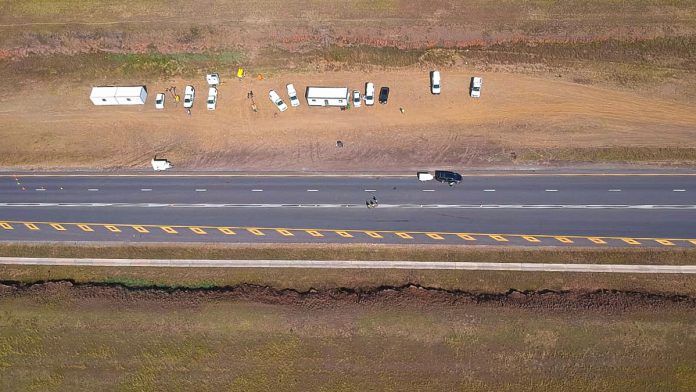 Roadblocks across the province help curb the spread of the Coronavirus.

What is allowed as South Africa moves to Lockdown Level 2

All communities serviced by the Secunda Police Station are...
Coronavirus News

All communities serviced by the Emzinoni Police Station are...
Coronavirus News

Tonight, as President Ramaphosa addressed the nation, a shred...