eMbalenhle residents are fed up and 1 GMM employee shocked
e

A very dreadful incident took place in one of eMbalenhle’s electricity substations this afternoon. The Govan Mbeki Municipality (GMM) employee was shocked at the substation and was taken to hospital for a full check-up.

For several weeks there has been scheduled power cuts in eMbalenhle resulting in households losing valuable items such as fridges and televisions.

From the early hours of 16 June, residents from extension 17, 15, 14 and other extensions were left in the dark for two whole days. The transformers burnt and in reply, scheduled power cuts were blamed for that by GMM.

One of the GMM employees were on site working when the electricity tripped and he was severely injured.

Later in the day, Residents from extension 14 held some GMM employees at ransom and told them, “no one will go home until the power comes back on again or until the transformers were fixed.”

Councillors tried their best in rescuing the employees from the wrath of the angry community.

In some parts of eMbalenhle, residents resorted to burning tyres and rubble.

It is safe to say that it is not safe to travel in eMbalenhle at all, especially at night.

Please avoid the area as much as you can for the time being.

There are rumours emanating from some communities stating that there might be a march very soon. This march will be to address the ongoing electricity issue in eMbalenhle.

On a previous occasion residents also resorted to violence when experiencing long periods without electricity.

On October 17 2017, The Bulletin wrote: “eMbalenhle looked like a war zone on Monday morning. Smoke was billowing up everywhere as protesters began burning tyres and other rubble in the roads and barricading the roads with large rocks and road signs.
The protesters threatened to move to Evander and Kinross to burn down the Mayor’s house, but that was averted. No marches towards neighbouring towns took place at the time of writing this article.
Protesters set the municipal offices alight in eMbalenhle Ext 8, 4 and 17. Municipal vehicles have also been set alight. Photos sent by public indicate that a dump truck and several cars were completely burned out.”

On June 26 2018, protesters resorted to burning Emba Mall. The bulletin wrote the following on Facebook: “eMba Mall is burning at the moment. The Bulletin learned that looters are still looting some goods from what is left in shops. It is not at all safe. Please avoid eMba area at all cost“.

VIEW THE LIVE VIDEO AT THE TIME HERE

READ ALSO: Small Towns in Mpumalanga to Turn to Courts to Get Electricity, Road Maintenance 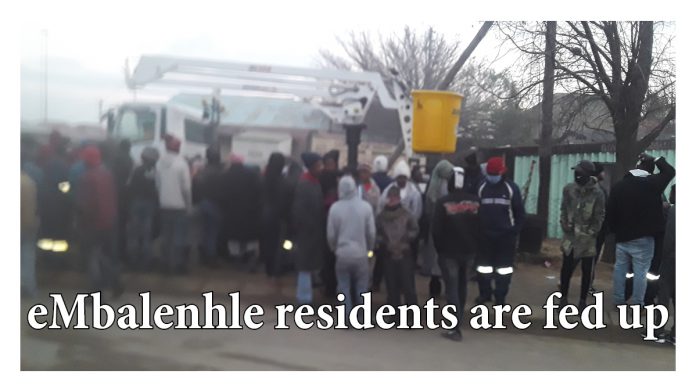 The EFF in Govan Mbeki Municipality has joined hands...
Crime