The Movement released a press statement last week voicing their displeasure about the 139(1)(b) intervention. They are asking for the total dissolving of the current municipal council.

The group gathered 10017 signatures on a petition and submitted it to the Provincial Legislature. They received a response indicating that they will receive feedback by December 4.

When asked about the response of the people as they signed the petition they replied, “The people are fedup.”

Govan Mbeki Municipality is continuing to struggle to deliver basic services and are currently having severe water problems after the 40% reduction in supply from Rand Water was implemented on the 9th of November.

The Eskom Debt alone escalated with R1,5 Billion from July 2018 to its current state. Fuel is not supplied due to non-payment by GMM resulting in vehicles being grounded, including refuse trucks.

Yellow fleet (construction and refuse vehicles) should have been replaced after 2018 but instead, mainly bakkies were acquired.

Progress update regarding the stand overtook by the Govan Mbeki Municipality Joint Civil Movement towards demanding the Mpumalanga Provincial Legislature to place Govan Mbeki Local Municipality under Section 139 Administration for their failures to uphold Chapter 7 of our Countries Constitution.

Whereas the Govan Mbeki Municipality Joint Civil Movement, commonly known as GMM Joint Civil Movement (Hereinafter referred to as the Association). A movement of Civil Society Organization and Community Campaigners aligned to bring into account those in defiant to the mandatory prescript of our South African Constitution and other Democratic Processes.

In raising our civil concerns and those of distressed citizens regarding the state of unconstitutional and poor municipal service’s received from the Govan Mbeki Local Municipality, a community protest managed by the GMM Joint Civil Movement ensued in a form of petitioning the Mpumalanga Provincial Legislature to intervene in a form of placing the Govan Mbeki Local Municipality under Section 139 (1) (C) Administration.

The campaign commenced date was on the 04th of August 2020, ended on the 29th October 2020 after recording 10 017 signed – hard copy petitions from distress community members around the Govan Mbeki Local Municipality advocating for a positive change to be enjoyed by all.

Is with great pleasure to announce that the 10 017 petitions from communities around Govan Mbeki accompanying the main petition from the GMM Joint Civil Movement, were successfully submitted and receive orderly by the Mpumalanga Provincial Legislature on the 04th of November 2020, as per the Mpumalanga Petitions Act Number 6 of 2000 guidelines.

It was a journey led to great achievements even though we were to be subjected under tough environmental condition such as the adherences towards the Covid-19 imposed regulations, limited manpower and undersized resources.

On the 13th of October 2020 the Office of the Secretary from the Mpumalanga Provincial Legislature responded to us by via email where we received a formal letter, signed by the Acting Secretary on the 12 of October 2020, with reference number: MPL 17/2/1/1146-2020, acknowledging receipt of the petitions and that the request has been forwarded to the relevant department for interventions and to report back to the legislature by the 04th of December 2020 where we shall receive a verdict regarding our demands.

For all interested parties seeking to gain access to the records can do so by interacting with us via email, call, visit our offices based at eMbalenhle or find it on our Facebook page.

We highly and sincerely thank all distress communities for standing up and exercising a constitutionally protected right for the demand of a better and prosperous change. END

The Eskom Debt alone escalated with R1,5 Billion from July 2018 to its current state. Rand water escalated to a point were GMM are now being restricted with their water supply. Fuel is not supplied due to non-payment by GMM resulting in vehicles being grounded, including refuse trucks.

Yellow fleet (construction and refuse vehicles) should have been replaced after 2018 but instead, mainly bakkies were acquired. 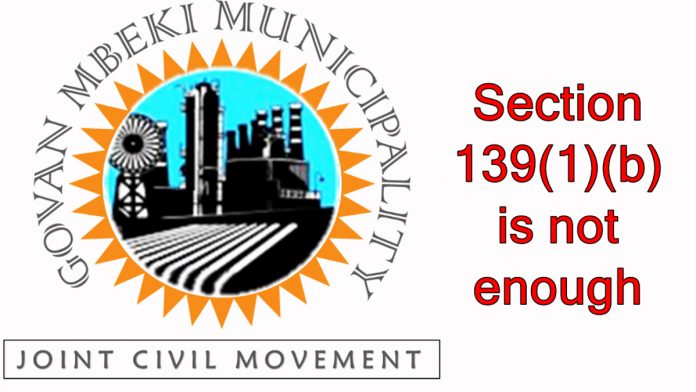