The electrical problems in Bethal and eMzinoni are proving a burden that is too much to bear for most residents.

One of the old age homes, Palm Oord, have been without electricity since Sunday while Silverjare is continually experiencing electricity interruptions.

Not only did the area at the northeast of Bethal had to experience extensive water supply problems for the past two years (it seems to be resolved for now) They also now have to face most of the power supply problems in Bethal.
eMzinoni is sharing the burden as well.

Protest actions started recently with residents taking to the streets, defying the lockdown, and burning tyres at night.

The Eskom debt of Govan Mbeki Municipality (GMM) is continuing to have a negative impact on the lives of its residents. Eskom has been cutting supply to Bethal, Emzinoni and eMbalenhle. This is because of the areas exceeding the Notified Maximum Demand (NMD).

Eskom refuses to increase the levels as GMM’s debt continues to grow.

“The Democratic Alliance (DA) has continually made suggestions and proposals in the Council to address the problem to no avail. The ANC led majority refuses to allow any suggestion, proposal, or motion to be accepted when it does not originate from within their own ranks”, Said Cllr Ciska Jordaan, Caucus leader of the DA in GMM.

The Residents of Bethal have also taken matters into their own hands and started to institute legal action against GMM.

Repairs to the ageing infrastructure seem to be exacerbating the problem. Cables are incorrectly connected and more and more transformers are lost. One resident house nearly caught fire when the electricity was reconnected. Houses that are fed from Three Phase must then deal with low voltage problems.

Food is spoilt as the power continues to be interrupted for hours on end. Equipment is also failing.

The DA in GMM have now escalated the problem to the national government after repeated pleas at the provincial level proved futile. Cllr Mariaan Chamberlain, GMM Constituency Chairperson escalated the issue to provincial level in April. She has also been working tirelessly to improve the situation in Bethal.

The Democratic Alliance (DA) has asked the Minister of Cooperative Governance & Traditional Affairs Dr Nkosazana Dlamini-Zuma, to intervene in the electricity crisis in Bethal, Mpumalanga.

The town falls under the Govan Mbeki Local Municipality, which owes Eskom R1.9 billion and is in breach of its repayment arrangement with the power utility.

According to Eskom, which has a direct supply line to Bethal, the town is exceeding its maximum demand limit for electricity.

In times of peak demand, this limit would ordinarily be lifted, but now Eskom refuses to do so in light of the delinquency of the Govan Mbeki municipality.
Credit action has coincided with the beginning of the lockdown, which has meant that households in Bethal have had to ensure daily power cuts of up to 12 hours a day – 6 hours in the morning, and another 6 hours at night.

Due to the damage wrought on the electricity network by the stops and starts of load-shedding, power outages have not been limited to official schedules.
Under the strain of the load shedding process, transformers blow, feeder cables burn, and ring feeds break, and so power outages become longer and more frequent.

In April, the DA raised the Bethal power crisis with Mpumalanga’s Provincial Government, but the situation has only become worse.

In these circumstances, the DA believes that s 139(7) compels the national government to step into the shoes of the province, or at least to put some steel in its spine.

The Bulletin received numerous complaints about the electricity supply and the effect that it has on the people of Govan Mbeki Municipality.

In December 2019 GMM was placed under investigation by the MEC for COGTA, Mr Mandla Msibi.

The MEC visited GMM council on Thursday, 21 November, to discuss the Terms of Reference for the Forensic Investigation in terms of section 106(1)(b) of the Local Government: Municipal Systems Act, Act 32 of 2000.

This report was due by the end of January, but no report has yet to be tabled to the Council

Let us hope that this will see the end of the electricity problems in Bethal. 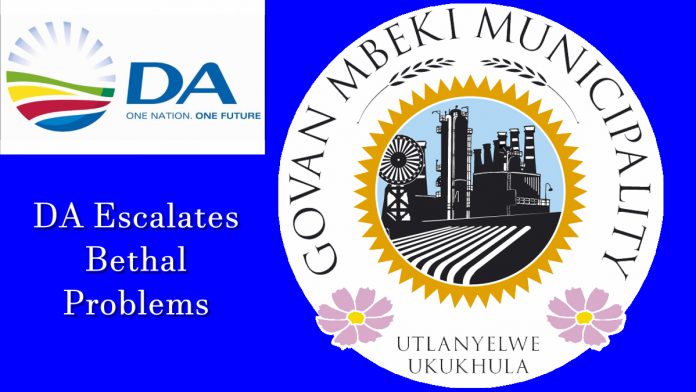 The Friends of the Thistle Grove Library hosted their second Spelling Bee on Wednesday. Spelling Bee! What is it? A spelling...

Security guard and 2 more to appear in court

A SECURITY GUARD AND TWO SUSPECTS DUE TO APPEAR BEFORE COURT ON CHARGES RELATED TO ROBBERY Nelspruit: 21 October 2021...

Mpumalanga Premier must act without delay and remove controversial...
CityPress

A Boiler Water Pump Failure at the Sasol Secunda...