Lindy Wilson, MP and Democratic Alliance Deputy Shadow Minister of Health said that a Human Crises is looming in Bethal with the collapsing of the Bethal Hospital.

Lindy wrote: “The Democratic Alliance (DA) has written to the Director-General of the Department of Health (DoH), Sandile Buthelezi asking for urgent intervention and assurance that the situation at Bethal Hospital in Mpumalanga will be rectified immediately.” In a statement released yesterday.

Just months into the opening of this new multimillion “state of the art” hospital in Bethal, it has collapsed and there is a human rights crisis looming. At present, the Mpumalanga town is lucky to receive 7 hours of electricity a day. We are advised that this is due to the non-payment of electricity accounts to Eskom. The hospital has also been impacted by power cuts.

The constant fluctuation of the electricity supply has rendered the autoclaves and anaesthetic equipment in the hospital’s new theatres useless. The generator, which provides back up when these forced power cuts occur, is not functional and the hospital is unable to operate for most of each day. The ventilators and oxygen machines cannot operate, and lives are put at immediate risk. Surgeons cannot operate for fear of electricity going off and the kitchens are unable to provide meals.

The DA has submitted parliamentary questions to the Minister of Health, Dr Zweli Mkize. He must explain why he is misleading the public about the preparedness of health systems to deal with the current crisis.

Any loss of life in this hospital due to the appalling mismanagement by the provincial health department will be a human rights violation and will have severe consequences.

The DA is concerned about the department’s inability to manage, sustain and improve health facilities. It is more concerning that Minister Mkhize gives assurances that health systems have been improved across the country and are better equipped to deal with the pandemic that is sweeping across South Africa. This is clearly not true.

Furthermore, the DA has requested an investigation into the sorry state of affairs at the Govan Mbeki Municipality with regards to its Eskom debt. Minister Nkosazana Dlamini-Zuma has much to answer to.

“The DA will not sit back while lives are being lost due to the gross mismanagement and incompetence of this ANC government,” Lindy said at the end of her Statement.

On the 19th December 2016, Cynthia Maseko wrote in Health-E News the following article:

About R569 million has been budgeted for a brand new state-of-the art hospital for the Bethal community, which falls under the Govan Mbeki municipal district in Mpumalanga.

The new high-tech facility, to be named Bethal Hospital, will replace the old structure which was officially opened in 1943. Construction is expected to take 35 months, with an estimated 300 jobs created during this phase.

“I am happy that our community is getting a new hospital. We don’t need any delays and I hope the selection of contractors was done fairly because if the selection process was not done correctly we could see (other disgruntled) contractors causing violence could disturb construction,” said Andries Moloi, a resident of Bethal.

MEC of Health in Mpumalanga Gillion Mashego said: “The anticipated completion date of the construction is expected to be 10 September 2019. The scope is to demolish the existing building and replace it with a new structure. The work has to be done in three phases to make sure there is no distraction and the facility is fully functional during the construction.

Portions of the hospital first to be demolished include the pharmacy, medical ward, two hostel blocks, the mortuary, nurses training centre, doctors flats and a lecture room.

MEC Mashego promised the public the provision of healthcare services at the facility would remain ongoing, and not be disrupted by the construction process. 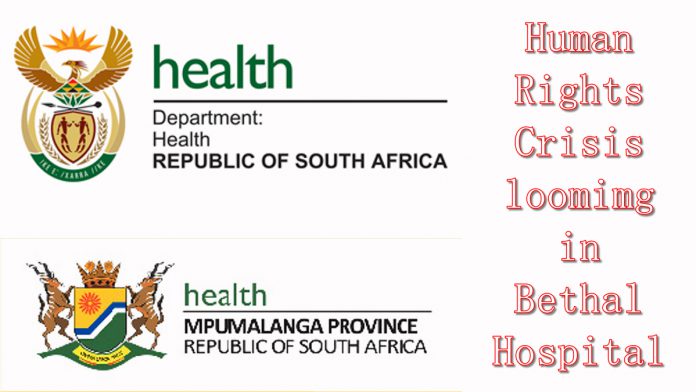 The Bulletin has just received word that the Mayor...
Read more
CityPress

The investigation report into GMM in terms of Section...
Read more