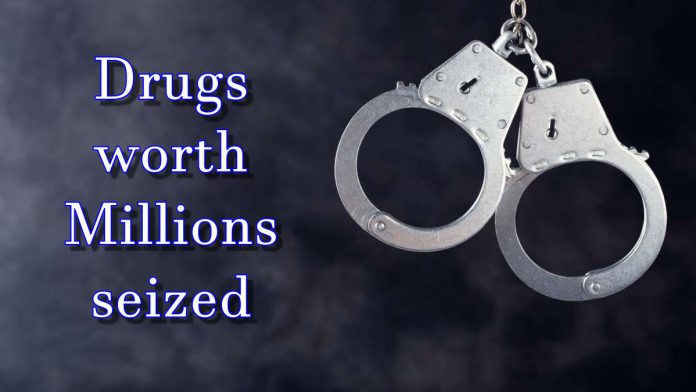 Two Suspects Arrested for Possession of drugs worth Millions

The General has cautioned those who think they can try their luck and traffic drugs, that the security agencies are equal to the task, not only focussing on enforcing Lockdown Regulations but also combating all criminal activities.

Two suspects aged 48 and 50 were arrested today, 25 May 2020, at Lebombo Border Post near Komatipoort for possession of suspected Crystal Meth and Heroin worth an estimated  R10 million, in street value.

According to the report, members of both the South African Revenue Services (Customs) and South African Police Service were conducting their normal duties when a white mini truck pulling a trailer, from Mozambique, made a stop at the border to be processed. Upon noticing the truck, the formations (SAPS and SARS) conducted a routine search as per their responsibilities and discovered makeshift compartments in both the truck and trailer, stashed with suspected drugs as well as bottles of illegal liquor.

Preliminary investigation indicates that the occupants, male and female, were planning to smuggle the drugs from Mozambique into the country before being intercepted by the said determined formations.

Various security agencies, SANDF, SAPS, SARS CUSTOMS as well as Traffic, have been hard at work, not only enforcing Lockdown regulations but also addressing all crimes in general. They have been very instrumental along the borderline, SANDF in particular where large amounts of liquor have been recovered as well as a considerable number of people arrested thus far.

The Provincial Commissioner of the South African Police Service in Mpumalanga, Lieutenant General Mondli Zuma has applauded the law enforcement officers for their resilience and vigilance at the border which resulted in the arrest of the two suspects. The General has cautioned those who think they can try their luck and traffic drugs, that the security agencies are equal to the task, not only focussing on enforcing Lockdown Regulations but also combating all criminal activities.

“I would also like to thank members of the public for their relentless efforts as they continue to provide information to the police which often led to many arrests, their work does not go unnoticed, ” said General Zuma.

Meanwhile, the two suspects will appear at the Komatipoort Magistrate’s Court on Tuesday, 26 May 2020, facing charges of possession of drugs and illicit liquor. Police cannot rule out the possibility of charging the two with an additional charge of dealing in drugs

Two Suspects Arrested for Possession of drugs worth Millions