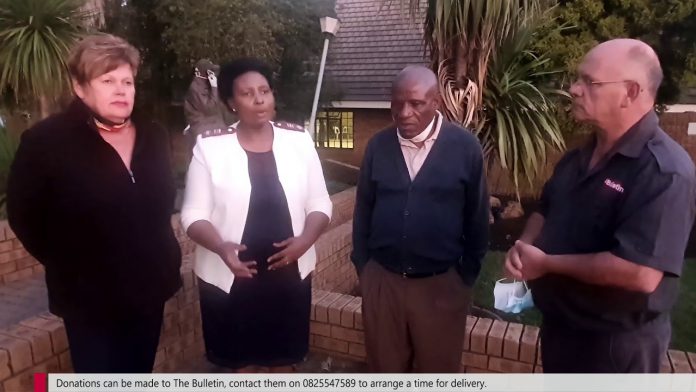 Kinross Lapa now shelter for the homeless during the lockdown

GMM identified the Kinross Lapa as a shelter for the homeless during the 21-day lockdown.
The homeless are moved there for this period where they will receive shelter and food.
They will also be screened for health issues especially mental health issues.

GMM officials from the Department of Community Services were in full combat giving support to the Political Leadership.

The homeless people were sanitised and provided with food by the Department of Social Development. Food will be provided three times a day. Food stock levels may dwindle during this period.

The Hon Executive Mayor emphasised to the homeless that they should adhere to the strict instructions on hygiene and safety.

The Bulletin would like to appeal to everyone to lend a helping hand with this shelter. One must remember that while the homeless are on the streets they fend for themselves through scavenging or begging. This is now no longer possible as most people are indoors and all restaurants are closed.

They are also confined to the Lapa and are dependent on the donations.

The Bulletin can be contacted on 0825547589 to make arrangements to collect or accept deliveries of the donations. If not available a Whatsapp can also be sent to this number.

Kinross Lapa now shelter for the homeless during the lockdown